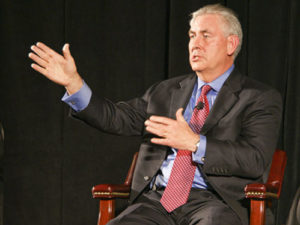 U.S. President-elect Donald Trump confirmed his nomination of ExxonMobil CEO Rex Tillerson for the post of secretary of state yesterday, surprising few but setting up what may be his nascent administration’s first real confrontation with the Republican majority in the Senate, which must confirm the nomination.

Tillerson has spent his entire working life at Exxon. His tenure has coincided with the company’s aggressive global expansion and equally aggressive efforts to conceal the fact that its products were destabilizing the global climate. Its Canadian subsidiary, Imperial Oil, is one of the largest producers of tar sands/oil sands bitumen, and the reserves Exxon controls in Alberta constitute more than a third of the company’s assets.

While some analysts credit Tillerson with skills honed at the global negotiating table, his career-long identification with a single company—to say nothing of his US$218 million in Exxon shares and $70 million retirement package due to kick in next year—raise numerous conflict of interest flags even for Senate Republicans.

With Tillerson’s nomination, and that of the bellicose John Bolton as deputy secretary of state, Trump “has decided to risk what looks to be a bruising confirmation fight in the Senate,” the New York Times writes. “Bolton is a conservative ideologue who has spent his career pushing dangerous policies, like the 2003 invasion of Iraq and an end to the 1994 agreement that froze North Korea’s plutonium-based nuclear weapons program.”

But it is Exxon’s and Tillerson’s personal ties to Russia and its autocratic President Vladimir Putin that will likely draw the greatest attention, the Post says, in light of persistent assertions from U.S. intelligence agencies that the Kremlin interfered in the U.S. election, and may have done so specifically to aid Trump’s campaign.

A focus of those ties will be a US$500-billion deal between Tillerson’s Exxon and Putin’s Russia that Think Progress describes as so big that if all its anticipated production goes ahead, it would blow an irreparable hole in efforts to curtail greenhouse gas emissions and re-stabilize the climate.

The same deal has been described as strategic to both Russia and Exxon, however, leading MSNBC’s Rachel Maddow to suggest that it “could explain why Putin appears to have interfered in U.S. elections in favour of a Trump victory.”

Indeed, the Washington Post predicts, “this confirmation fight [c]ould become the proxy for a broader debate about Russian interference in the American election. That is a debate Trump does not want to have.”

Nonetheless, some leading Senate Republicans seem eager to have it. “I don’t know the man much at all, but let’s put it this way: If you received an award from the Kremlin, ‘the order of friendship,’ then we’ll have some questions. I don’t want to prejudge the guy, but that’s a bit unnerving,” frequent Trump critic Sen. Lindsey Graham (R-SC) told reporters. Sen. John McCain (R-AZ) agreed that “it’s a matter of concern to me that he has such a close relationship with Vladimir Putin, that that would colour his approach to Vladimir Putin and the Russian threat.”

“If just three Senate Republicans defect,” the Post adds, “Rex Tillerson’s expected nomination as secretary of state would be dead.”