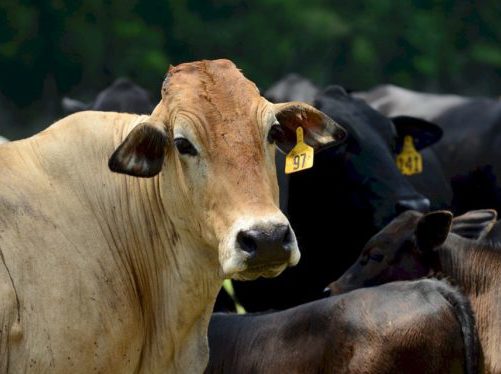 While carbon dioxide levels in the atmosphere have been rising at a slightly slower rate in recent years, levels of methane—the main greenhouse gas’s shorter-lived but more potent sibling—have been soaring, the international Global Carbon Project research consortium reports.

“Methane in the atmosphere was almost flat from about 2000 through 2006. Beginning 2007, it started upward, but in the last two years, it spiked,” Stanford University earth scientist and GCP report co-author Rob Jackson told the Post.

Methane concentrations in the atmosphere have more than doubled since the pre-industrial era, from about 700 to more than 1,840 ppb. At just 1.8 parts per million, that’s a fraction of carbon dioxide’s concentration, which broke through 400 ppm this year. “But molecule for molecule, methane packs a much stronger punch,” the Post notes. “Over a 100-year period, the emission of a given amount of methane is about 28 times as powerful when it comes to global warming as the emissions of an equivalent amount of carbon dioxide (even though the methane doesn’t stay around for that long).”

At present methane concentrations, that’s like adding the global warming effect of another 50 ppm of carbon dioxide over the next century—for an effective total climate impact equivalent to 450 ppm of CO2 levels alone.

“Looking at the scenarios for future emissions, methane is starting to approach the most greenhouse gas-intensive scenarios,” Jackson said. “That’s bad news. We’re going in the wrong direction.”

Methane has been a particular target of the three NAFTA leaders this year. Prime Minister Justin Trudeau and President Barack Obama announced tighter controls on methane emissions by the fossil fuel industry in March. Mexico signed on in June. Watchers of U.S. president-elect Trump’s cabinet appointments, heavily loaded with climate science deniers and fossil industry lobbyists, have suggested the initiative may not survive his inauguration.

But as it turns out, fossil emission may play a relatively minor role compared to other sources of methane, which occurs naturally as a by-product of the breakdown of organic matter. The big source of growing emissions appears to be the world’s appetite for meat.

“We think agriculture is the number one contributor to the increase,” Jackson said. “There’s been a secondary increase from fossil fuel use, partly because there continues to be more fossil fuels extracted. We do think they’ve increased, but we don’t see evidence for leaky oil and gas wells causing this spike in global methane.”

Rather, Jackson said the main bump in emissions is “almost certainly coming from livestock and specifically cattle, and also rice paddies, landfills, and the management of manure in agriculture.”