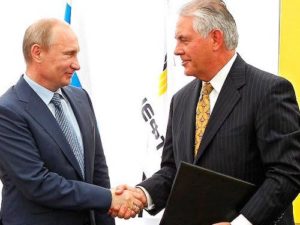 ExxonMobil CEO Rex Tillerson is likely to get the nod as U.S. President-elect Donald Trump’s nominee for secretary of state, according to multiple news reports Saturday.

Tillerson’s close working relationship with Russian President Vladimir Putin, among other heads of state, is said to have been a factor in the president-elect’s decision.

Trump transition spokesperson Jason Miller said there would be no official announcement before this week “at the earliest”. But the battle lines around the intensely controversial nomination are being drawn, and they already cross party lines.

“Tillerson’s nomination could face intense scrutiny in the Senate, considering his years of work in Russia and the Middle East on behalf of the multinational petroleum company,” the Washington Post reports. “Already, two leading Republican hawks, Sens. John McCain (AZ) and Lindsey O. Graham (SC), have voiced concerns about Tillerson’s serving as the nation’s top diplomat because of his ties to Putin.”

“You want to give the president of the United States the benefit of the doubt because the people have spoken,” McCain told Fox News Saturday. “But Vladimir Putin is a thug, a bully, and a murderer, and anybody else who describes him as anything else is lying.”

“Few corporate titans are closer to Putin than Tillerson,” noted Jason Bordoff, founder of Columbia University’s center for global energy. “So his pick, along with Trump’s campaign rhetoric, would suggest a sharp shift in U.S. policy toward Russia.”

But Trump was expected to praise the Exxon CEO in an interview to be aired on Fox yesterday. “He’s much more than a business executive; he’s a world-class player,” he said. “He knows many of the players, and he knows them well. He does massive deals in Russia—for the company, not for himself.”

Citing Trump confidantes, the Post reports that “Tillerson’s stock rose late in the [selection] process, after he met with the president-elect on Tuesday and again on Saturday morning at Trump Tower in New York. Trump settled on Tillerson, 64, because he projects gravitas, is regarded as a skillful manager, and personally knows many foreign leaders through his dealings on behalf of the energy giant.”

Center for International Environmental Law President Carroll Muffett was scathing in response to the announcement.

“The nomination of Rex Tillerson for Secretary of State is unconscionable, irresponsible, and potentially catastrophic,” he said. “But we cannot view it in isolation. Without exception, Donald Trump has nominated a cabinet marked by inexperience, intractable conflicts of interest, and a demonstrated hatred of the agencies they’ve been tapped to lead and the people they are sworn to protect. Donald Trump appears intent to undo a century of environmental and social progress and return America to the age of robber barons and corporate trusts. Who better to turn to than Exxon, the granddaddy of them all?”

Union of Concerned Scientists President Ken Kimmell called the appointment a “grave error” that “cements governance by oil.” Combined with Trump’s nomination of climate denier Scott Pruitt to lead demoralize destabilize dismantle the U.S. Environmental Protection Agency, Trump’s nod to Tillerson shows the president-elect “is creating a government of, by, and for the oil and gas industry,” Kimmell said. “Never before have we seen such a concentration of extreme wealth and privilege in a single cabinet.”

He added that “the secretary of state must also be a champion for action on climate change, building on last year’s agreement by nearly 200 countries in Paris that offers our last, best hope for averting truly devastating climate impacts.” Tillerson, by contrast, “has spent 40 years at Exxon, a company whose current business model hinges on the failure of this historic international effort. He has disparaged and downplayed the science on climate change, and his company is even currently under investigation for defrauding the public and shareholders for decades about the dangers of climate change caused by fossil fuels.”

“Handing over the State Department to the CEO of the world’s largest oil company is like giving Voldemort the keys to Hogwarts,” warns 350.org co-founder Jamie Henn on Huffington Post. “Exxon’s business plan relies on the world blowing past 1.5°C and 2.0°C of warming. The company’s share price is directly tied to its ability to burn through all of its oil and gas reserves, something that would be impossible if countries got serious about addressing the climate crisis.”