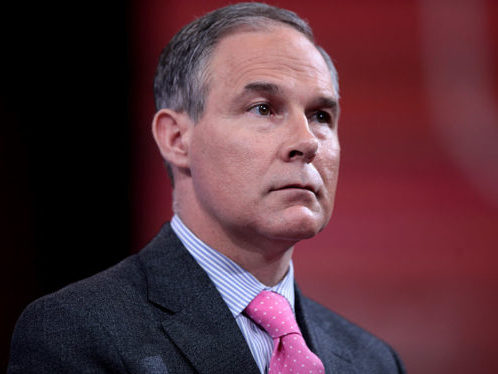 Pruitt, described by the New York Times as “Oklahoma attorney general and a close ally of the fossil fuel industry,” is widely believed to have a mandate to dismantle President Barack Obama’s climate change initiatives—and take an axe to the EPA itself. Pruitt “has been a key architect of the legal battle against Mr. Obama’s climate change policies, actions that fit with the president-elect’s comments during the campaign.”

The Pruitt announcement “touched off a disturbance in the Internet, to put it mildly, and the aftershocks will probably reverberate throughout Trump’s term(s) in office,” CleanTechnica notes. “After all, as Oklahoma AG Pruitt has joined in a legal battle pitting 26 states against the very federal enforcement agency he’ll be guiding.”

“Having Scott Pruitt in charge of the U.S. Environmental Protection Agency is like putting an arsonist in charge of fighting fires,” The U.S. Sierra Club stated. “He is a climate science denier who, as Attorney General for the state of Oklahoma, regularly conspired with the fossil fuel industry to attack EPA protections.”

In a recent article for the National Review, Pruitt echoed deniers’ false attack on the settled science of climate change.

“Scientists continue to disagree about the degree and extent of global warming and its connection to the actions of mankind,” he wrote. “That debate should be encouraged—in classrooms, public forums, and the halls of Congress. It should not be silenced with threats of prosecution. Dissent is not a crime.”

“It’s a safe assumption that Pruitt could be the most hostile EPA administrator toward clean air and safe drinking water in history,” Ken Cook, head of the Washington, DC-based Environmental Working Group, told the Times. “During the campaign, Mr. Trump regularly threatened to dismantle the EPA and roll back many of the gains made to reduce Americans’ exposures to industrial pollution, and with Pruitt, the president-elect would make good on those threats.”

But Branstad will also bring knowledge of renewable energy technology and policy to the new administration, albeit from a distance of many time zones. In mid-November, the Des Moines Register pointed to the strength of Iowa’s wind and renewable fuel industries and described Branstad as “the state’s chief renewable fuel and energy backer.”