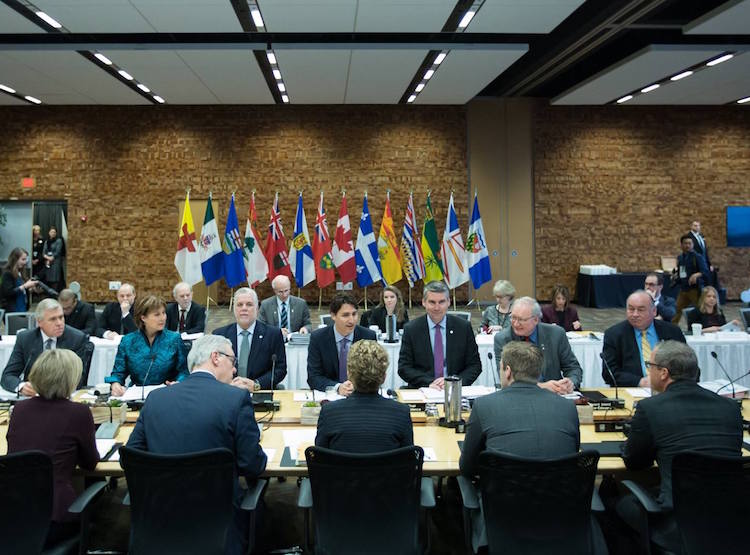 After months of negotiation and anticipation, consultation and debate, Canada’s first ministers are in Ottawa today to release a pan-Canadian climate strategy that will likely approach or achieve the 30% carbon reduction by 2030 that was originally committed by the Harper government, then subsequently adopted by Prime Minister Justin Trudeau and his cabinet.

“The agreement will include a reference to pricing carbon, but will also stress flexibility to allow provincial and territorial governments to limit the impact carbon pricing will have on their economies,” CBC reports. “The final agreement will include a list of already announced measures to battle climate change—such as new building codes to boost energy efficiency, more charging stations for electric cars, and expanding clean electricity sources and upgrading power grids.”

Trudeau and Environment and Climate Minister Catherine McKenna have repeatedly declared the 30% target a floor, not a ceiling for Canada’s climate ambition. It falls far short of the broad commitment to a 1.5 to 2.0°C limit on average global warming at the heart of the Paris Agreement, not to mention Canada’s own long-term goal of cutting emissions 80% by 2050, unveiled at the Marrakech climate conference last month.

But climate and energy hawks are greeting the pan-Canadian plan as an historic moment, even as they make the case for deeper, faster cuts and an end to new fossil fuel projects that will only add carbon to the national inventory.

“This is the point where they need to show us the math,” said Pembina Institute federal policy director Erin Flanagan. “They need to give us actual numbers.”

McKenna said the specifics will be in today’s announcement.

“We will show how we’re going to meet our 2030 targets—what measures we’ve taken, what additional measures we will be taking to meet the target,” she told CBC in an interview from China. “You will see a specific plan. You will see, in each sector, what we’re doing to reduce emissions. You’ll see what investments we’re making. You’ll see how we’re working with Indigenous communities, in particular in the north, where they have specific concerns about diesel but also about adaptation.”

In a blog post published yesterday, Flanagan said the government is on track to fulfill the PM’s Paris promise that “Canada is back” as a member of a global community committed to confronting climate change head-on—as long as the climate plan answers some key questions.

The post balanced a year of powerful positives (a floor price on carbon, an accelerated coal phase-out, an emerging clean fuels standard for transportation, a commitment to methane regulations for the oil and gas industry, and a rapid draw-down of hydrofluorocarbons) with some stunning negatives (federal approval for two liquefied natural gas megaprojects and two new pipelines), concluding that “our federal and provincial governments moved the climate action yardstick forward for the country.” Today, though, the details will matter.

“How will the clean fuels standard be designed to ensure it achieves 30 Mt of reductions in 2030, and when will it be implemented?” Flanagan asked. “Will the first ministers adopt a bold national action plan for energy-efficient buildings? By how much will the pan-Canadian carbon price increase after 2022? Will federal-provincial equivalency agreements on an accelerated coal phase-out result in additional emissions reductions in the electricity sector, beyond what was already likely to occur? What accountability mechanism might the first ministers unveil to ensure additional policies are developed to achieve decarbonization by mid-century?”

All crucial questions, she adds because “after all, press releases and first ministers’ meetings alone don’t reduce emissions.”

In a backgrounder released Wednesday, Clean Energy Canada stressed the need for a credible plan to turn words into action. “While this outcome sounds straightforward, it would also be groundbreaking for Canada,” CEC stated. “It’s been a long time since we’ve had a federal government make a serious effort to hit a climate target. And we’ve never had a truly ‘national’ plan for climate action, meaning a plan adopted by federal, provincial, and territorial governments.”

Before the plan could even be released, Saskatchewan Premier Brad Wall was already rumbling about the court action to follow. “I don’t think the federal government’s going to change their position, and I know that we’re not either, but we have to continue to state it and we have to make sure we’re also indicating our interest in the fight against climate change,” he said Wednesday in Regina. “When they come up with whatever device they’re going to use, then we will respond and we’ll file in court accordingly.”

“Saskatchewan, in particular, has said they want to take us to court, which I think is unfortunate,” McKenna responded. “I think this is about making us more competitive, not less…This is a huge opportunity for Canada, that the world is moving in a direction of a low-carbon economy, and we want the incentives for Canada to be well placed to take advantage of that.”

The Saskatchewan Environmental Society responded to Wall yesterday, warning that the province’s own climate plan falls short of the 26 megatonnes (Mt) by 2030 it would have to save to align with the 30% national target.

“Saskatchewan is consistently criticized for not doing its fair share when it comes to climate action because it has delayed, avoided necessary choices and effective action,” the SES stated. “Saskatchewan’s annual contribution to serious climate change impacts around the world is valued at $2.8 billion. Yet the Saskatchewan government has called for $2.65 billion to be directed away from the least developed countries, often those most impacted by climate change.”

That was a reference to Wall’s recent demand that the federal government claw back the $2.65 billion over five years it committed to the UN’s Green Climate Fund and redirect it to domestic carbon capture and storage (CCS) spending.

Earlier in the week, Pembina reported survey results showing that 73% of Canadians want their governments to do more to limit climate change. Strong majorities support less government emphasis on coal (73%) and oil (60%), and overwhelming numbers favour greater emphasis on solar (85%) and wind (71%) development.

“After years of appearing to put all our eggs in the same energy basket, this survey reveals Canadians are open to a shift in how we produce energy” said principal investigator Erick Lachapelle of l’Université de Montréal. “Canadians are aware of the many benefits of moving toward clean energy. However, we still need governments to lead this effort, as many Canadians are still reluctant to pay more to help spur this transition.”