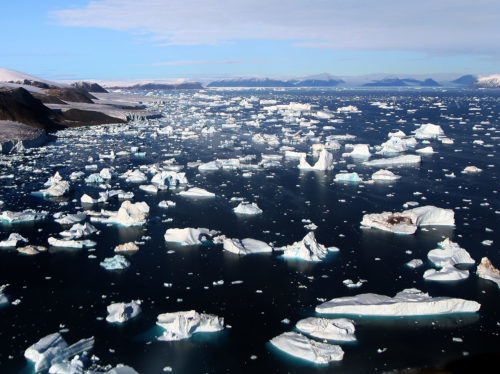 Scientists say they are stunned, but not yet panicked, to see record low sea ice cover at both the Arctic and Antarctic poles at the same time.

“It really is stunning,” said NASA sea ice specialist Walt Meier. “But I’d hesitate to draw any major conclusions. ‘Global’ sea ice is not really indicative because the environments are so different. And, of course, they’re in opposite seasons.”

The latest decline in the Arctic hasn’t been as dramatic, the Washington Post reports, partly because ice extent has already taken such a serious hit from global warming. But researchers still tracked “an almost unprecedented occurrence for November” when Arctic sea ice declined under the relentless assault of record-breaking high temperatures—the Post article documents a difference of 18°F/10°C, but in mid-November the variance was as high as 36°F.

The story on the other side of the world is less straightforward so far. “The Antarctic is interesting because it had been high in recent years. Maybe this marks a turn toward a declining trend, but it’s far too soon to say for sure,” Meier said.

Either way, it’s clear that both poles are pushing new boundaries for ice loss.

“Average Arctic sea ice extent for November set a record low, reflecting unusually high air temperatures, winds from the south, and a warm ocean,” the U.S. National Snow and Ice Data Center reported. “Since October, Arctic ice extent has been more than two standard deviations lower than the long-term average. Antarctic sea ice extent quickly declined in November, also setting a record low for the month and tracking more than two standard deviations below average during the entire month. For the globe as a whole, sea ice cover was exceptionally low.”