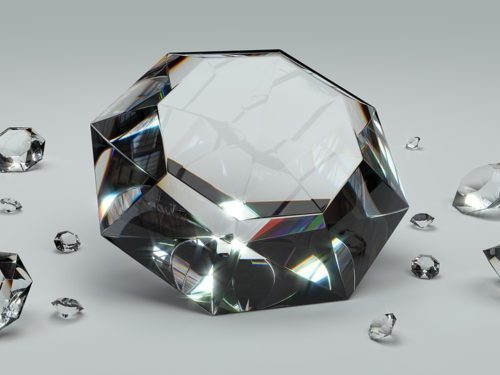 It’s the kind of story that makes you check that it wasn’t written on April 1: UK scientists claim carbon-14 nuclear waste from nuclear power plants can be made into batteries that will produce electricity for thousands of years—while also safely containing the waste radiation. Oh, and they’re also bright and shiny.

But the story appears to be true, with some work still to do to actually build a battery and put it to productive use. The advance was announced by physicists and chemists at Britain’s Bristol University, who had started by asking themselves what could be done with 95,000 tons of carbon blocks that had been used to moderate nuclear reactions in British power reactors. The blocks are not as highly radioactive as waste fuel, but the carbon-14 isotope they contain still has a half-life of 5,730 years—meaning that it takes that long to lose half of its toxicity.

The germ of the idea is that carbon is also the substance of which diamonds are made, and that diamonds, when placed near a source of radioactivity, generate a small charge. The researchers reasoned that a diamond made from carbon-14 would carry its own radioactivity within it. From that starting point, they “have demonstrated a prototype ‘diamond battery’ using nickel-63 as the radiation source,” and “are now working to significantly improve efficiency by utilizing carbon-14,” the university announced in a release.

The Bristol researchers aim first to produce a conventional, synthetic diamond using carbon-14 recycled from the most-radioactive outer layer of waste carbon blocks (in the process rendering the less radioactive cores easier to store), then encase that in another synthetic diamond layer.

The team chose carbon-14, explained chemist Neil Fox, “because it emits a short-range radiation which is quickly absorbed by any solid material. This would make it dangerous to ingest or touch with your naked skin, but safely held within diamond, no short-range radiation can escape. In fact, diamond is the hardest substance known to man, [so] there is literally nothing we could use that could offer more protection.”

“There are no moving parts involved, no emissions generated, and no maintenance required, just direct electricity generation,” said materials professor Tom Scott. “By encapsulating radioactive material inside diamonds, we turn a long-term problem of nuclear waste into a nuclear-powered battery and a long-term supply of clean energy.”

The team is still deciding how much carbon-14 to use for each battery, but calculates that a diamond made from 1 gram of the material would deliver about 15 Joules per day. “This is less than an AA battery,” the university’s release observes. “Standard alkaline AA batteries are designed for short time frame discharge: one battery weighing about 20 grams has an energy storage rating of 700J/g. If operated continuously, this would run out in 24 hours. Using carbon-14, the battery would take 5,730 years to reach 50% power, which is about as long as human civilization has existed.”