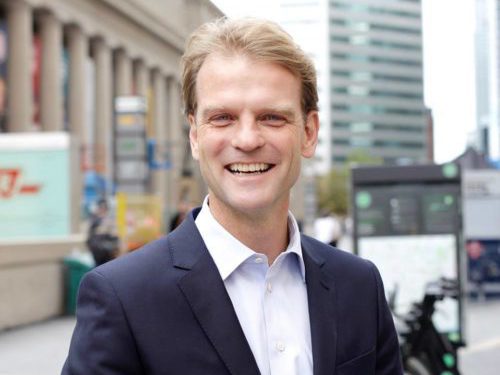 A Harper-era Conservative cabinet minister who co-sponsored an anti-immigrant cultural snitch line during last year’s federal election campaign, and is now seeking the party leadership, was caught nodding and grinning as an Alberta crowd erupted in Trump-style chants of “Lock her up” directed at the province’s premier, Rachel Notley.

Former MP Chris Alexander has said he “regrets” co-sponsoring a barbaric cultural practices tip line with then-fellow minister, and now fellow leadership candidate, Kellie Leitch, during the election campaign. Not because of its premise, which he has said he stands behind, but because “it’s why we lost.”

Alexander gave a similarly evasive defence after people at a rally he was addressing in front of the Alberta legislature “began the ‘Lock her up!’ chant popularized during [U.S.] president-elect Donald Trump’s campaign,” but referring to Notley, the Canadian Press reports. The ex-diplomat let the chant continue, appearing to smile approvingly and at one point beating time to it with his hand, according to reporters present.

Asked later by reporters why hadn’t challenged the chant, Alexander claimed credit for the fact that “I didn’t join in,” and for changing the subject after the chanting subsided, insisting that “I totally disapprove of that particular chant. I don’t think it’s fair. I don’t think it’s the right thing to say at a rally or elsewhere.”

But if that was so, CP notes, Alexander said nothing at the rally to dissent from the authoritarian sentiment.

Nor did his distinction fly with Maclean’s columnist Scott Gilmore, who happens to be married to Environment and Climate Change Minister Catherine McKenna. “There’s a sad irony here,” Gilmore tweeted. “As a diplomat in Kabul, Alexander fought hard for democratic reform. Now he gleefully leads ‘lock her up’ chants. Lay down with pigs, Chris, you’re going to get muddy.”

The rally against Notley’s proposal to expand the province’s carbon tax had been organized by the pro-oil faux news site Rebel Media.

Leitch has likewise stepped back from the Conservative duo’s widely derided proposal in the waning days of their party’s losing campaign, but similarly continues to seek the party’s leadership on a divisive platform of sorting Canadians by their “values.” She had her own ‘lock ‘em up’ moment in a Facebook post Tuesday, “vowing to increase penalties for illegal protests and calling for environmental lobbying to be recognized as a political activity,” iPolitics reports.

And astonishingly, late Tuesday afternoon, climate-denying CPC leadership candidate Brad Trost doubled down on the incident, tweeting that he “wanted to be there w my friend @calxandr supporting Albertans would’ve chanted w them.” Notley, who along with other women in her cabinet has been subjected to a steady stream of verbal abuse since assuming office, said she didn’t believe the chants represented the majority of Albertans or Canadians.

“I think that there’s a bit of an ugly edge to politics that’s developing,” she told CBC, but “I’m confident that most citizens reject that kind of politics. Most Albertans and most Canadians understand why democratically-elected politicians should be able to do their job without the kinds of threats that were embedded in that particular chant.”