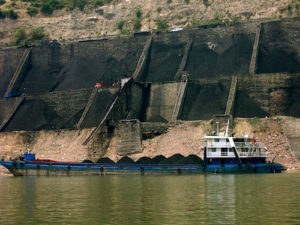 Optimism that China has passed its moment of “peak coal” may have been premature, according to a report late last month in the New York Times.

For a while, it seemed the world’s biggest burner of coal was shaking the habit. Some analysts even predicted earlier this year that the country had successfully “decoupled” its economy from coal-fired electrical demand, after cutting production by 15.5% below 2015 levels.

But a recent change of course “shows how hard it will be to wean the country off coal,” the Times reports. “A lack of stockpiles and worries about electricity blackouts are spurring Chinese officials to reverse curbs that once helped reduce coal production. Mines are reopening. Miners are being lured back with fatter paycheques.”

Despite record investments in solar and wind generation, China still relies on coal for nearly three-quarters of its electricity, the paper reports, producing “more emissions than all the oil, coal, and gas consumed in the United States.”

Earlier this year, China took several steps to curb its coal use, including a moratorium on new coal-fired power plants. The nation “began closing smaller, privately-owned mines, cutting production while clamping down on some of the places that have made Chinese coal mining so dangerous,” the Times writes. “Just last summer, economic planners told mines they were not allowed to operate more than 276 days a year.” The International Energy Agency joined the Institute for Energy Economics and Financial Analysis in judging that Chinese coal use had peaked in 2013, and would now decline.

But after speculators drove up the price of coal, “an unusually hot summer and early autumn added to power demand,” while a loosening of credit for homebuyers “produced strong demand for electricity from the steel and cement industries.” In response, China has “encouraged state-owned mines to sign long-term contracts at low prices with power stations [and] raised the number of days that mines could operate to 330 days per year.”

“I get a kick out of people in the West who think China is decarbonizing,” Brock Silvers, a Shanghai banker and former coal company director, told the Times. “I see no sign of it whatsoever.”

Johannes Trüby, a senior coal and power analyst at the International Energy Agency, continued to insist that “long-term trends in the Chinese economy meant that China’s coal use would decline overall,” the Times reports. But Trüby now concedes that “we cannot exclude the possibility of a transient spike in coal demand in the next couple years that might take demand above 2013.”