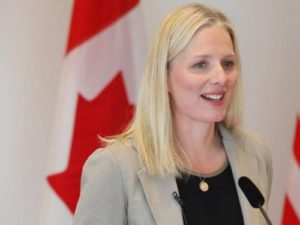 Canadian-designed nuclear technology “is a possible option” for helping China meet its energy needs, Environment and Climate Change Minister Catherine McKenna plans to tell her counterparts in that country, during a series of high-level meetings this week that will include a visit with the China Council on Environmental Cooperation and Development.

“I’m really excited about my trade mission to China,” McKenna told reporters before she embarked on her trip. “They need solutions, and it’s a $23-trillion opportunity. I’m going to be there with Canadian business leaders from a variety of different sectors, ranging from the mining sector, to carbon capture and storage, to renewables.”

That $23-trillion opportunity appears to be based on an estimate by the World Bank Group, the National Observer reports. The Bank’s international development finance arm arrived at the figure “after the international community agreed on the Paris Agreement on climate change in 2015, based on promises from 21 emerging-market economies that represent nearly half of all global emissions.”

China is just one part of that group, albeit a big part. The country “represents the fastest-growing market for clean technology industries, with a potential for business of more than $63 billion,” McKenna’s office clarified in a release.

Quebec’s SNC Lavalin is one of the companies hoping to cash in on Chinese plans to build at least 60 nuclear power stations over the next decade, half of them in the next five years.

While she is in China, the release added, “McKenna will also encourage the people of China to take part in Canada’s 150th celebration by visiting our national parks and historic sites, to experience and learn more about Canada’s natural and cultural heritage.”