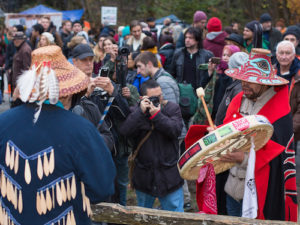 Prime Minister Justin Trudeau failed to protect the health and safety of Canadians or uphold his government’s vaunted new relationship with First Peoples when he announced approval for the Trans Mountain pipeline expansion, Grand Chief Stewart Phillip of the Union of British Columbia Indian Chiefs wrote Friday in a blistering Globe and Mail op ed.

“You failed to do your job when you approved two tar sands pipelines that will put rivers and coasts at risk and that will undeniably lead to much more of the devastating climate change effects that we are already feeling, and that will one day soon wipe out our cultures and all of life on Earth,” Phillip wrote.

“You also failed in your sacred duty to respect the Title and Rights of the indigenous peoples that you share this land with. You knew you would irreparably harm a relationship that you publicly and repeatedly claimed is more important to you than any other.”

Trudeau must have known “that allowing two pipelines to carry over a million barrels a day of additional tar sands production is not the way we are going to solve the climate crisis,” Phillip argued. “No one could truly believe that more oil will help us get off oil.” And “you cannot truly believe that the Kinder Morgan seven-fold increase in tanker traffic is not a real risk to the B.C. coast, to everything that Coast Salish Peoples hold dear, including the fishing and tourism industries, to the orcas, shellfish harvesting, and the dynamic life systems in the ocean and on land,” he told the PM.

The decision can’t have been about jobs and the economy, he continued, since “we have seen that the oil industry is a roller-coaster ride, and the ride will soon come to a full stop in any event.” The only possible conclusion is that Trudeau was prepared to “make an extremely unpopular decision that will secure you political favour with dirty oil supporters and get away with it.”

The response is already building, with “more than 10,000 Coastal Protectors…signed up at coastprotectors.ca to do what needs to be done to stop Kinder Morgan,” Phillip said. And the Treaty Alliance Against Tar Sands Expansion is ready to stand against “Kinder Morgan, Enbridge Line 3, and any other tar sands pipeline that rears its ugly serpent head, including Keystone XL and Energy East.” He added that “we will go do our job, Prime Minister. The job you could not do. All we ask is that you let us go do it in peace.”

Phillip’s parting shot was a response to Natural Resources Minister and GreenPAC endorsee Jim Carr’s remarks to an Edmonton business audience Thursday, in which he said the government could deploy police or the army during future pipeline protests. “If people choose for their own reasons not to be peaceful, then the government of Canada, through its defence forces, through its police forces, will ensure that people will be kept safe,” he said. “If people determine for their own reasons that that’s not the path they want to follow, then we live under the rule of law.”

Carr later said those comments weren’t meant as a threat.

“There is no warning intended,” he told CBC Radio’s The House. “I mean to say, if you look at all of my comments, that we celebrate and cherish our capacity in this free society to be able to protest,” he said. “People will protest in peaceful ways, and that’s not only acceptable, it’s a hallmark of who we are as Canadians.”