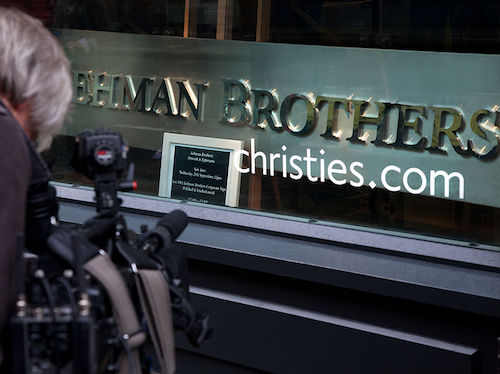 Who knew? It turns out one of the best ways to raise fossil executives’ ire is to compare their businesses to Lehman Brothers, the high-flying Wall Street financial firm whose September 15, 2008 declaration of Chapter 11 bankruptcy became the opening act of the last economic crash.

Bank of England Governor Mark Carney got that conversation last year, with a series of speeches warning that stranded fossil assets could translate into trillions in economic risk. The fossils, to put mildly, have not been amused.

“Oil companies have been incensed by the idea that they may be the next Lehman Brothers,” IEEFA reports, in a repost from The Economist. “Ben van Beurden, chief executive of Royal Dutch Shell, talks of financial regulators trying to ‘weaponize financial markets against oil and gas’. Patrick Pouyanné, the boss of Total, has urged Mr. Carney to ‘take care of the pound, not the oil industry.’”

But Carney’s remarks last year “presaged a change in attitude towards oil companies by governments, financial regulators, and investors that has become clearer since the Paris climate change agreement last December,” IEEFA notes. Regulators are pushing oil and gas companies to declare the portions of their reserves that are unburnable in an era of carbon controls. And “activist shareholders have had unprecedented support from mainstream investors for their efforts to force oil companies to explain how their businesses would be changed by full-scale decarbonization.”

The Economist article argues the stranded assets issue back and forth, but concludes with commentary from Mark Lewis of Barclays, an advisor to Carney’s Task Force on Climate-related Financial Disclosures. Lewis warned “that if measures to stop global warming are fully implemented, oil company revenues could fall by more than $22 trillion over the next 25 years, more than twice the predicted decline for the gas and coal industries combined.”

Lewis apparently “sees a cautionary tale in the woes of European utilities, hit by government action to penalize coal and nuclear power,” the business magazine adds. “They have suffered such a devastating collapse in their share prices in recent years that some of the biggest, including Germany’s E.ON, have been forced to split off their fossil fuel businesses. If the big oil companies are encouraged to discuss climate change risks openly, they will have a better chance of avoiding such a fate.”