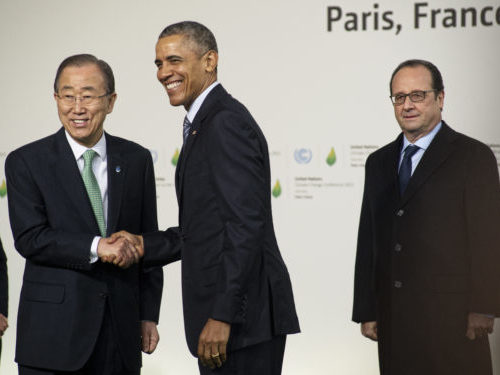 “President Obama thinks climate change is the greatest strategic and geological and existential threat to our future,” McFarland said at the time. “If it were not so tragic, it would be funny. Here we have ISIS, who are attacking with suicide vests and Kalashnikovs and potentially chemical weapons in the French water supply. What are we doing? We’re going to fight ISIS. We’re going to have windmills, we’re going to have solar panels. We’re going to show them.”

She claimed Obama’s presence at COP 21 “[gave] encouragement to the terrorists who feel that they have been selected and chosen by Allah to establish the caliphate and kill everybody who disagrees with them. They now look at this and they are laughing.”

(Actually, it seems likely that ISIS got a bigger laugh, and a bigger gloat, out of Trump’s election win.)

Contrary to McFarland’s evidence-free approach to climate, Think Progress notes that the U.S. Department of Defense has declared climate change a “threat multiplier.” A 2015 DOD report stated that “climate change is an urgent and growing threat to our national security, contributing to increased natural disasters, refugee flows, and conflicts over basic resources such as food and water.”

So “McFarland’s claims — as well as those of Trump’s other national security advisors, who also deny the link between climate change and national security — run counter to both official Department of Defense literature and the opinion of many within the national security community,” writes correspondent Natasha Geiling.