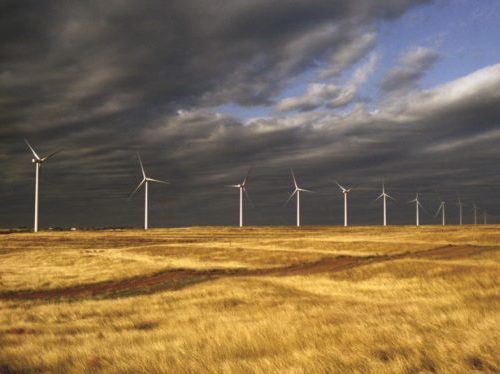 While the battle over the Dakota Access pipeline intensifies, the Standing Rock Sioux and six other tribes across the Dakotas are staking their claim to a different energy future with what Midwest Energy News describes as “an enormous collection of wind farms on six reservations, scattered across what is generally rated as one of the windiest areas in the country.”

Each site can support at least a couple of hundred megawatts of production, and “the ultimate vision is to develop as much as two gigawatts, and potentially more,” said consultant and project manager Caroline Herron. “We’re recognizing that we’ll need to phase this in. We will probably start with a couple sites with a couple hundred megawatts each.”

The development effort dates back four years, to the formation of the Oceti Sakowin Power Authority. At present, proponents are working to raise US$10 million in collateral that will trigger a further $10 million loan guarantee from the U.S. Department of Agriculture, sufficient to fund cultural and environmental surveys to assess potential impacts on the proposed sites.

The tribes are working hard to get their wind farms built without turning to outside financiers that would want partial control of the projects, said Lyle Jack of the Oglala Sioux Tribe.

“We do need the jobs and revenue that this project would create, and it also coincides with our culture in taking care of the earth and climate,” he said. “To us, the wind is sacred. Also, it’s giving us a chance to do our part in reducing the carbon footprint, and to help slow down climate change.”

But “we all run into the same problems, such as investors wanting to come in and own the project, and to just lease the land from the tribes. The tribes want to control their own energy resources.”