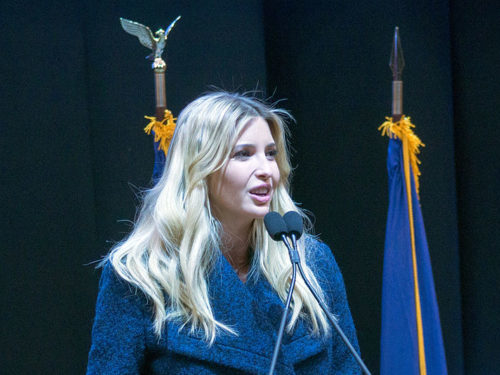 As U.S. President-elect Donald Trump sends shockwaves through the climate community, appointing climate deniers to senior transition positions and rumbling threats to withdraw from the Paris Agreement, a counterweight may be emerging from an unexpected direction: his daughter Ivanka.

“Ivanka, 35, Trump’s avatar among the moneyed left-wing elite, is now poised to be the first ‘first daughter’ in modern history to play a larger public role than the first lady,” Politico reports. “Ivanka wants to make climate change—which her father has called a hoax perpetuated by the Chinese—one of her signature issues, a source close to her told Politico. The source said Ivanka is in the early stages of exploring how to use her spotlight to speak out on the issue.”

If Ivanka Trump pursues that path, her “opposition to CO2 emissions and fossil fuels will inevitably create another warring sphere of influence in Trump’s orbit,” the Washington Beltway publication notes. “Incoming Chief of Staff Reince Priebus has clarified in recent days that Trump’s ‘default position’ on climate change is that ‘most of it is a bunch of bunk.’”

But “no one is closer to Trump than his eldest daughter, and it would not be the first traditionally liberal position she has tried preaching to conservatives. At the Republican National Convention in July, Ivanka championed pay equity and parental leave, family issues she intends to continue pushing from what will likely be a unique platform that represents her role as an advisor, a surrogate, and functional first lady.”

“The issues she’s talking about are ones she’s always talked about,” the unnamed source told Politico. “These are totally consistent with what she’s developed with her brand. She is playing a critical role in being able to have issues that moderate and liberal women care about—and creating a bridge to the other side.”