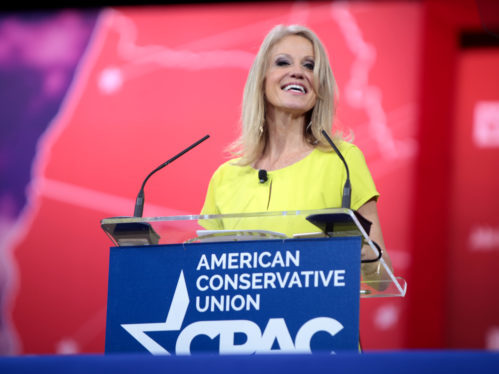 Trump campaign manager and transition advisor KellyAnne Conway will be in Alberta January 12 to tour the tar sands/oil sands and give a paid speech to a fundraising dinner in Calgary as a guest of the Alberta Prosperity Fund, which bills itself as Canada’s only conservative super-PAC (political action committee).

“This visit by such an influential member of a U.S. administration should stand as a call to action for all Alberta industry,” Prosperity Fund founder Barry McNamar said in a release. “I hope that Ms. Conway receives an enthusiastic welcome here in Alberta and can return to the U.S. with an informed attitude towards Canadian export products.”

“They reached out to us. She really wants to come up here,” added Fund spokesperson Randy Kerr.

Conway previously worked as a conservative pollster and TV commentator and had endorsed Sen. Ted Cruz (R-TX) in the Republican primary before signing on to manage the Trump campaign in mid-August. “With Trump’s victory on November 8, 2016, she became the first woman in history to lead a successful U.S. presidential campaign,” Wikipedia reports.

“The Alberta Prosperity Fund said in July that it would throw its support behind Jason Kenney for the leadership of the PC Party, prior to his official entry into the race,” CBC reports.