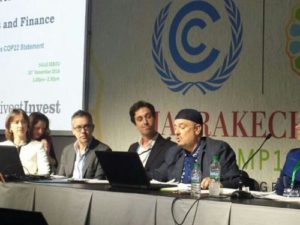 The election of Donald Trump will have a particularly direct impact for one group of U.S. environmental activists. Grist reports that the election results will force Muslim environmentalists to “focus first on their own safety and citizenship.”

While Muslim communities in the U.S. “have historically taken less of an interest in environmental issues due to more immediate priorities, including their own survival and protection,” according to Green Muslims Development Director Soltan Bryce, Grist notes that Muslim environmentalists have “taken big steps to incorporate sustainability within their faith.” The Islamic Society of North America has divested from fossil fuels. A campaign called for food conservation, biodegradable tableware, energy-saving bulbs, and a sermon on Islamic conservation principles during the month of Ramadan. And the Green Scripture Project has brought together “a curated collection of verses on faith and the environment in the Islamic tradition,” writes correspondent Sabrina Imbler.

But now, the president-elect’s “disregard for climate change’s impacts across the globe represents just a fraction of the overall hostility [U.S. Muslims] faced throughout the Trump campaign,” Imbler notes. “In the weeks since his election, Trump seems to be sticking fast to the anti-immigration, Islamophobic vows that greased his path to victory.”

The article points to the added difficulties Muslim environmentalists will face trying to do their work—or live their lives—in Trump’s America. “If we’re all put in an internment camp, we might be affected in our ability to be advocates,” Bryce observed.