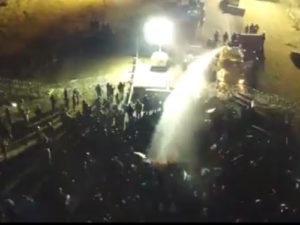 The U.S. Army Corps of Engineers is planning to close the main protest camp opposing the US$3.8-billion Dakota Access Pipeline by next Monday, December 5, even as human rights observers called on Attorney General Loretta Lynch to investigate accusations of excessive force used against protesters.

The human rights groups reacted “after police used tactics…that included the use of rubber bullets, concussion grenades, tear gas, and water cannons sprayed on hundreds of protesters for hours in freezing temperatures, according to live-streamed video and protesters’ accounts,” InsideClimate News reports.

Now, the Army Corps is intent on “closing the portion of the Corps-managed federal property north of the Cannonball River to all public use and access effective December 5, 2016,” states a notice the Corps delivered to the Standing Rock Sioux on Friday. “This decision is necessary to protect the general public from the violent confrontation between protesters and law enforcement officials that have occurred in this area, and to prevent death, illness, or serious injury to inhabitants of encampments due to the harsh North Dakota winter conditions.”

The Corps plans to set up a “free speech zone” some distance from the site. “Our Tribe is deeply disappointed in this decision by the United States, but our resolve to protect our water is stronger than ever,” said Tribal Chair David Archambault II. Cheyenne River Sioux Tribal Council Chair Harold Frazier called for a broader boycott against businesses in Bismarck, North Dakota in response to what he called the “heavy-handed, illegal, and violent oppression” of Dakota Access protesters.

Protesters in the main camp said they planned to stand their ground.

“Hard times may be ahead, but we got this,” wrote activist Dallas Goldtooth of the Indigenous Environmental Network. “We stand by our original instructions, as Indigenous peoples, ready to defend the dreams of our ancestors and protect the sacredness of Mother Earth.”

By contrast, Morton County Chair Cody Schulz welcomed the Army Corps notice, describing it as a first step to a peaceful resolution of the crisis. “However, this decision means nothing unless the federal government follows up by sending federal law enforcement personnel to enforce the decision,” he said.

Earlier last week, Amnesty International and the American Civil Liberties Union (ACLU) called on U.S. Attorney General Loretta Lynch to investigate what they see as excessive use of force against the protests, “Law enforcement shouldn’t treat protesters like an enemy on the battlefield, and that unfortunately is what we saw Sunday night,” said Amnesty USA spokesperson Eric Ferrero. “We have very serious concerns about law enforcement violating the human rights of protesters.”

“The county decided to go through the process of stripping Schwartzenberger of his job and badge after hearing a report from a firm it hired to look into a growing number of complaints about the sheriff from his employees and others in county departments,” the local news report notes. “The Village Business Institute found grounds to remove the sheriff based on harassment and intimidation, amid concerns that he fostered a quasi-military environment.”

While most of the DAPL coverage focused on local protests, Canadian Press carried a story on yet another potential conflict of interest for U.S. President-elect Donald Trump, this one having to do with his holdings in two of the companies behind the intensely controversial project.

While that stake “is modest compared with his other assets, ethics experts say it’s among dozens of potential conflicts that could be resolved by placing his investments in a blind trust, a step Trump has resisted.”