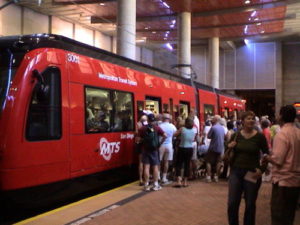 Cities like Miami Beach, San Antonio, San Diego, Los Angeles, and New York may well be on the front lines of U.S. climate action, now that their federal government is about to be taken over by a band of climate deniers and fossil fuel enthusiasts.

Given President-elect Donald Trump’s widely-touted anti-climate agenda, “it seems safe to assume that for the next four years, domestic climate policy will be in the deep freezer—while the rest of us heat up,” write correspondents John Metcalfe and Laura Bliss. “Yet local leaders across the U.S. don’t need to be persuaded of the devastating impacts of climate change—environmentally, socially, and financially speaking—even if Trump and his top advisers do. Global warming’s effects are perhaps easiest to see on the local scale, with rising tides, melting snowcaps, and drier summers. A significant part what’s causing these changes lies in urban centres, which generate an estimated 70% of global greenhouse gas emissions, and house more than 50% of the population.”

That momentum carried forward earlier this week into an open letter to Trump from mayors of 37 large and small U.S. cities.

“We write today to ask for your partnership in our work to clean our air, strengthen our economy, and ensure that our children inherit a nation healthier and better prepared for the future than it is today,” the mayors stated. “The effects of climate change — extreme storms, wildfires and drought; sea level rise and storm surge; choking air pollution in cities; disruption of agricultural supply chains and jobs in rural heartlands; and coastal erosion, to name a few — are a clear and present danger to American interests at home and abroad.”

“The cost of prevention pales in comparison to cost of inaction, in terms of dollars, property, and human life. As our incoming president, as a businessman, and as a parent, we believe we can find common ground when it comes to addressing an issue not rooted in politics or philosophy, but in science and hard economic data,” the mayors added.

“Simply put, we can all agree that fires, flooding, and financial losses are bad for our country, that we need to protect our communities’ most vulnerable residents who suffer the most from the impacts of climate change, and that we all need healthier air to breathe and a stronger economy — rural and urban, Republican and Democrat — and in terms of our domestic quality of life and our standing abroad.”

The local initiatives profiled in the CityLab post vary: Miami Beach has been focusing on sea level rise, zoning, and greenhouse gas measurement, San Antonio on resource conservation and resilience, San Diego on local renewables and vulnerability to flooding, Los Angeles on methane controls and an aggressive renewable energy program, New York on energy-efficient buildings, overall carbon cuts, and resilience in the wake of Hurricane Sandy.

But across the board, “U.S. cities have the power to shrink that footprint and prepare for the worst, even in the absence of financial or regulatory support from the federal government,” CityLab notes. “Congress has long stalled on advancing climate policies, anyways—while cities have taken control of crucial variables that determine emissions and sustainability: renewable-energy programs, bus-rapid transit and rail, shared mobility, protections against flooding, and the ever-rising seas.”