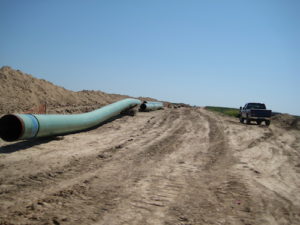 “Some days I wake up, look at the news, and wonder if the government of Canada actually thinks it can horse-trade with physics,” Fenton writes. “In the movie playing in my head, [Prime Minister] Justin Trudeau is sitting down with the laws of thermodynamics printed out on his desk, asking his minister of science to find a compromise so they’ll stop getting in the way of him building a pipeline.”

But “try as anyone might, you can’t compromise with a flood, prevent a wildfire with talking points, or negotiate with a drought. Climate change requires action, and that action needs to reflect the cold, clinical reality that in 2016, we have very little room left to keep burning fossil fuels, and no room left to build new fossil fuel projects.”

So while the accelerated coal phase-out was great news, the strategy “only works if you also phase out other fossil fuels,” Fenton writes. “To meet the goals we agreed to in the Paris Climate Agreement, we cannot build any new fossil fuel projects, period. Not building any new coal fired power plants is a big part of doing that, but it’s only a step in the right direction. If this government follows that step with a decisive leap against climate action, by, say, approving the Kinder Morgan pipeline, they’re making a huge mistake.”