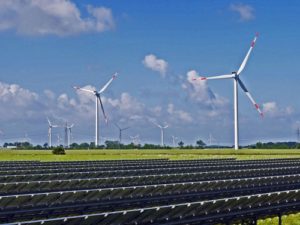 The focus of Canada’s renewable energy industry is shifting west, the Globe and Mail reports, as wind and solar development expand in Canada’s prairie provinces while business cools off in Ontario and Quebec.

“Clearly, the opportunities for the industry are out in Alberta and Saskatchewan,” said David Hickey, head of wind power development for Siemens Canada. “That’s a clear shift of focus for everybody.”

Until now, “the largest concentration of renewable energy development has been in Ontario, where the controversial green energy policies of the Liberal provincial government effectively subsidized new wind and solar projects. But in the face of political pressure over electricity prices, and a glut of power production, the province is cutting back,” the Globe reports.

By contrast, “in Alberta and Saskatchewan, the opposite is happening. Prompted by growing power demand and a desire to cut greenhouse gases, the two provinces are lighting a fire under green energy development.” Alberta plans to double its green power procurement to 30% of demand by 2030, while Saskatchewan has set its sights on a 50% target.

“It is clear that the focus of Canada’s wind energy industry is shifting westward,” Robert Hornung, president of the Canadian Wind Energy Association, told the Globe. While wind producers aren’t abandoning any other province, he pointed to a “reallocation of resources” in anticipation that the two prairie provinces will procure as much as 7,000 MW of new renewable power in the next 15 years.

Canadian Solar Industries Association President John Gorman noted that the prairies have the best solar regime in Canada. The region has “20 to 25% more fuel—solar radiance—than in Ontario,” he said. With solar production costs already falling fast, the solar regime in Alberta and Saskatchewan will set up photovoltaic producers to deliver electricity at “jaw-dropping” low prices.