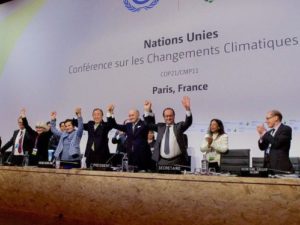 If U.S. President-elect Donald Trump pulls his country out of the Paris Agreement on January 20—a prospect he threw into doubt yesterday in an interview with the New York Times—he will be flying in the face of views held by more than two-thirds of his constituents, the Washington Post reports.

At least until his visit this week to the Times, Trump has been an outspoken critic of the Paris deal, calling climate change a “hoax invented by the Chinese.” And while he did not include his promise to “cancel” the agreement (a feat not within his power, even as president) in a brief YouTube video released this week itemizing his Day One to-do list, “I think this is likely a first-day action,” a source inside the presidential transition team told Energy and Environment News reporter Evan Lehmann, according to blog coverage by the Governors Wind Energy Coalition.

That action would run counter to the opinions of 71% of Americans who support the climate accord, the Washington Post reports, citing a survey of 2,061 citizens by the Chicago Council on Global Affairs. That support, the Council found, extends to 57% of Republicans.

However, “differences reappeared when respondents were asked whether they agreed that climate change is ‘a serious and pressing problem’ that should be addressed even if there are ‘significant costs’. 62% of Democrats agreed, compared to 19% of Republicans.”