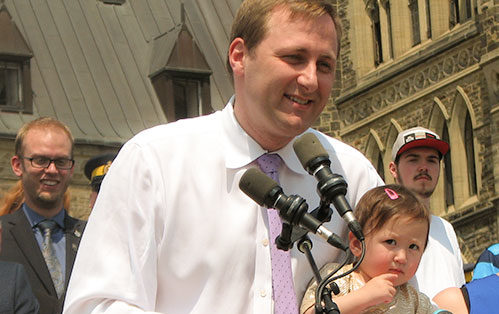 Brad Trost, MP for Saskatoon-Humboldt, in the same province where Brad Wall is premier and greenhouse gas emissions have soared faster in the last decade than in any other Canadian province, doesn’t think humanity has much to do with climate change, or should worry about it.

He also wants to lead Her Majesty’s Loyal Opposition in the Canadian House of Commons.

“I don’t believe there is substantial major man-made climate change occurring in our world today,” Trost, one of the dozen men and women running to succeed Stephen Harper as leader of the Conservative Party of Canada, told iPolitics.

“The most outspoken member of the party’s social conservative wing running for the leadership,” as the outlet described Trost, spoke in advance of his party’s first leadership debate, saying he believed that climate change is “all or mostly natural.”

The Saskatchewan MP’s environmental policy, as iPolitics describes it, includes “no carbon pricing, no cap-and-trade, no cutting carbon emissions by 30%. And the Paris Accord? Trost would shred it.”

Trost told iPolitics he hoped his position would “be one of the things that sets him apart from the other candidates.”

It will certainly distinguish him from Michael Chong, the Toronto-area MP who is the only candidate campaigning for his party’s top job on a promise to institute a carbon tax.