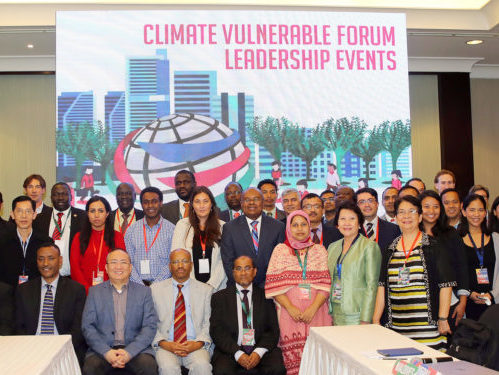 Members of the Climate Vulnerable Forum (CVF) undertook to update their current carbon reduction targets and develop long-term decarbonization plans before 2020, and complete the transition to 100% renewable energy economies as soon as possible, on the final day of the United Nations climate change conference in Marrakech.

“Climate action does not limit development—it strengthens it,” declared the 48 CVF members, many of them among the world’s poorest countries, all of them facing the immediate, severe impacts of a rapidly-warming climate.

Marshall Islands poet Kathy Jetnil-Kijiner, who delivered the formal reading of the declaration, told delegates that, according to legend, her family’s ancestors had the ability to chant to the sharks and turn the tides around an island nation located two metres above present-day sea level. “I believe in the power of the spoken word because I believe we can change the tides,” she said, describing the declaration as the first step in “turning the tide and saving our world.”

“Without stronger climate action, we might not survive, and this is not an option,” said CVF Chair and Ethiopian environment minister Gemedo Dalle.

“Climate action is not optional, and neither is the developed countries’ obligation to support climate-resilient development. Adaptation is central to the ability of vulnerable countries like the Philippines to thrive,” said Evelyn Cruzada of the Philippines Office of the Cabinet Secretary.

“We are pioneering the transformation towards 100% renewable energy,” added Mattlan Zackhras, the Marshallese Minister in Assistance to the President. “But we want other countries to follow in our footsteps in order to evade catastrophic impacts we are experiencing through hurricanes, flooding, and droughts.”

CVF members include low-lying Bangladesh, a country that faces the prospect of 100 million environmental refugees due to sea level rise, but is currently planning more than 20 new coal plants to meet its growing electricity needs. U.S. Secretary of State John Kerry called that path “suicide” Wednesday, in a speech to COP delegates.

The CVF’s action earned it a Ray of the COP award from Climate Action Network-International, recognizing the Forum as “an example to all other governments” at this year’s UN climate conference. (Disclosure: After attending the first half of the CVF’s high-level meeting November 18, The Energy Mix Curator Mitchell Beer made the initial pitch for the Ray of the COP award at CAN-I’s daily meeting that afternoon.)

Russia bagged CAN-I’s better-known and much-acclaimed Colossal Fossil award for its standout performance as the worst-behaved participant at this year’s COP, and the biggest carbon emitter that hasn’t yet ratified the Paris Agreement. Earlier in the conference, Russia won another coveted Fossil of the Day for presenting rapid nuclear development as a realistic climate solution, apparently claiming the deeply flawed response to the Fukushima nuclear disaster proves the viability of the technology.