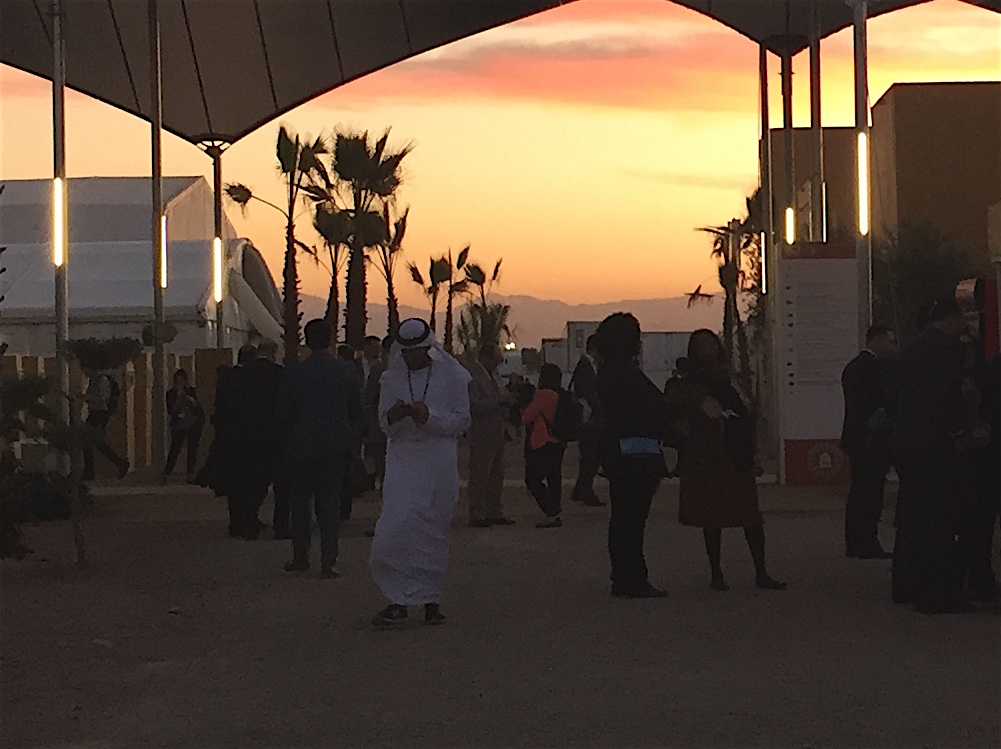 MARRAKECH—The United Nations climate conference ended late Friday with some heartening results and transformative moments, but with many of its key decisions pushed off to future negotiating sessions. Countries advanced on the important line-by-line details of how the Paris Agreement will be implemented, but failed to significantly progress on the financing urgently needed for climate change adaptation and greenhouse gas reductions in developing countries.

COP 22 was supposed to be the “Action COP” and the “African COP”. And delegates from nearly 200 countries and countless civil society, scientific, Indigenous, youth, and business organizations arrived at COP 22 in at least a mildly celebratory mood. The Paris Agreement had entered into force in less than a year, rapidly exceeding its minimum ratification milestone of 55 countries, representing at least 55% of global greenhouse gas emissions. With several more countries signing on while the Marrakech conference was in progress, the totals as of mid-day Sunday stood at 111 countries, representing 77.22% of emissions.

That global sense of momentum and common cause took on a new urgency on the morning of Wednesday, November 9. That was when the world woke to the news that the next president of the United States would be an alt-right icon renowned for his belief that climate change is a hoax concocted by China to undermine the U.S. economy, and determined to withdraw his country from the Paris Agreement.

(The U.S. military advises otherwise. And in Marrakech, China pointed out that President-elect Donald Trump’s hoax fantasy couldn’t be accurate, since the Republican administrations of Ronald Reagan and George H.W. Bush first opened international negotiations around climate change in 1980s, without opening a channel to the Chinese government. China also signaled it would be happy to gain the economic benefits and international good will of assuming the sole mantle of international climate leadership, if that’s the way the Trump administration wants it.)

What followed was a moment of unsurpassed strength and solidarity, as governments around the world affirmed their commitment to the Paris deal and made it crystal clear that the agreement, like climate change itself, is far bigger than any one country or head of state. In the end, not one of the 195 other countries that signed on in Paris last December walked away.

And from the United States itself, as Trump named a climate denier to lead the post-Obama transition in the U.S. Environmental Protection Agency, there was word that state and local governments, at least 360 major businesses, and an array of civil society organizations would step up to fill the anticipated vacuum. InsideClimate News reported the possibility, though not the certainty, that the U.S. already has the momentum to meet its Paris target of cutting its carbon pollution 26 to 28% by 2025, even if Trump does away with President Barack Obama’s signature Clean Power Plan. And in an interview from Marrakech with ClimateHome, California State Senate President Kevin De Leon said legal advisors were studying how his state, the world’s sixth-largest economy, could apply to join the Paris agreement if the national government steps out.

The Moroccan government, holder of this year’s COP Presidency, issued the sweeping Marrakech Action Proclamation, intended express unstoppable momentum for implementation of the Paris Agreement. “This year, we have seen extraordinary momentum on climate change worldwide, and in many multilateral fora,” states the final version of the Proclamation. “This momentum is irreversible—it is being driven not only by governments, but by science, business and global action of all types at all levels.”

It calls for the “highest political commitment” to urgently combat climate change, solidarity with the countries most vulnerable to its impact, and urgent efforts to raise ambition for deeper carbon cuts and urgent action. The Proclamation also reaffirms developed countries’ commitment to mobilize $100 billion for global climate finance—though it doesn’t specify that that’s to be an annual commitment as of 2020 or that it must be divided evenly between climate adaptation and mitigation.

A distinct highlight of the COP was a landmark declaration by the Climate Vulnerable Forum, a 48-member alliance that includes some of the world’s poorest countries, and has been a major influencer at past COPs. On Friday morning, the CVF affirmed that its members would update their current carbon reduction targets and develop long-term decarbonization plans before 2020, and commit to 100% renewable energy economies as soon as possible.

Alongside the calls to action, though, COP 22 was always meant to be an in-depth working session, with technicians and negotiators rolling up their sleeves to dig into the “mechanisms and modalities” that will turn a set of binding international commitments to voluntary national carbon targets into a successful, coordinated drive for global decarbonization by mid-century. Country representatives in different meeting rooms throughout the sprawling Bab Ighli complex were frequently heard spending half an hour or more debating a tiny phrase or a choice of punctuation. Sometimes, that was because veteran negotiators knew precisely how to stall a session to keep more pressing issues from the floor. Often, though, it was because the precise choice of language in a massive, complex, world-wide consensus document really is that important.

The negotiations produced some results, small and large. Significantly, countries agreed to complete the “rulebook” for Paris implementation in 2018, two years ahead of their original schedule. The accelerated timeline is essential for climate action, though a challenge for developing countries that lack the resources to assign large delegations to simultaneously address multiple technical issues at a single conference.

A handful of countries, including Canada, released initial roadmaps that will bring them closer to decarbonizing their economies by mid-century. But even the most ambitious and best-developed fell short of the ultimate decarbonization goal in the Paris Agreement: Germanwatch congratulated the government of Angela Merkel for setting an 80-95% carbon reduction target by 2050, but pointed out that the plan needed more precision and an even more ambitious target to align with Paris.

Delegates also began setting the terms for an all-important “Facilitative Dialogue” in 2018, where countries will be expected to commit to faster, deeper carbon reductions to bring action under the Paris Agreement in line with the ultimate goal of holding long-term global warming at 1.5°C. But COP 22 put a shadow over that discussion with the announcement that Poland, a proudly defiant coal state, will likely host the 2018 Conference of the Parties (COP 24), giving it significant and perhaps undue influence over the course, depth, and ultimate effect of the Facilitative Dialogue.

And in the end, key decisions on climate finance were postponed to a mid-year meeting scheduled for May 2017 in Bonn, Germany or to COP 23—also set to take place in Bonn late next year, under the leadership of the government of Fiji.

Many of the civil society organizations in Marrakech to hold governments accountable for their promises in Paris were pleased with some of the progress delegates made, but disappointed with the glacial pace of the process and the vitally important issues that were put off for further negotiation.

“The lessons of Marrakech are clear: Don’t look to bureaucrats or climate-denying presidents to take the lead on global climate action,” said David Turnbull, campaigns director at Oil Change International. “Look to the people in the streets and in communities around the world. These are the people-powered movements resisting fossil fuels and building a renewable energy future, and this is the path to victory.”

“COP 22 demonstrates that countries DO want the Paris Agreement to be successful, and the United States election results did not distract from this mission,” the U.S. Center for International Environmental Law noted in a release.

“Overall, however, the progress made at COP22 was slow. In real terms, this leaves the planet—and all its inhabitants—in the same position as last year, with the scale of ambition and commitments too low to keep global warming below 1.5°C.”

Unless countries pick up the pace, CIEL noted, “people across the globe will experience the increasingly severe impacts of a changing climate, and the harmful impacts of poorly-implemented climate mitigation projects.”

Oxfam International pointed out that time is running out on the climate solutions Paris delegates promised last year. “This was billed as a conference for action and implementation of the Paris Agreement. Instead, we saw a stubborn refusal from developed country ministers and negotiators to fill the adaptation finance gap and face the fact that the Agreement doesn’t fully protect lives that will suffer the most from climate change,” said international climate policy lead Isabel Kreisler.

“Adaptation finance is not just an abstract numbers game,” she added. “It’s about providing women farmers in Africa with seeds to plant drought-resistant crops and feed their families; it’s about building seawalls so millions who live in coastal areas survive rising sea levels.” Historic as the Paris Agreement was, “millions of people facing extreme and erratic weather can’t afford to keep waiting.”

ActionAid global climate lead Harjeet Singh warned that “in the planet’s hottest year ever, when parts of Africa are dealing with their worst drought in decades, rich countries’ willingness to leave developing countries in the lurch holds back climate action at a time when we need it most. Without real finance, and drastic cuts in emissions from rich countries, the planet doesn’t have a chance of staying under 1.5°C warming.”