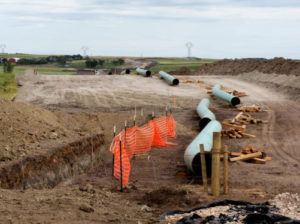 Depending on your point of view, the lame-duck Obama administration either blinked or stiffened its spine, as it ordered construction on the contested and partly Canadian-owned Dakota Access Pipeline to stop short of a planned crossing beneath the Missouri River, InsideClimate News reports.

The U.S. Army Corps of Engineers declined to grant a final easement for a section of the Dakota Access pipeline that would also intrude on land regarded as sacred by the Standing Rock Sioux, whose traditional territory the pipeline crosses. “Not all of our prayers were answered, but this time, they were heard,” Standing Rock tribal chair David Archambault II said in a statement.

The nearly-complete 1,900-kilometre pipeline is intended to carry about 500,000 barrels a day of crude oil from North Dakota’s Bakken oilfield to Illinois. The Corps permitted the pipeline’s construction under the Missouri River in July after a perfunctory environmental assessment, but “did not grant the final easement required for the river crossing,” ICN notes. In September, the Obama administration ordered it to take a second look at the issue—leading to this week’s announcement.

The Corps explained that further consultation with the tribe and other stakeholders was “warranted in light of the history of the Great Sioux Nation’s dispossessions of lands, the importance of Lake Oahe to the Tribe, our government-to-government relationship, and the statute governing easements through government property.”

“The Missouri River,” ICN notes, “is the main source of drinking and irrigation water for the 3,600 square-mile [Standing Rock] reservation and its 8,200 residents, 40% of whom live below the poverty level. The U.S. EPA estimated that oil from a spill at [the] Missouri River crossing could reach the tribe’s drinking water intake pipe within several hours.”

How long the latest decision will stand, however, was open to question. Not only has U.S. president-elect Trump expressed his desire to clear regulatory barriers to fossil energy developments, he also has a personal financial interest in the Dakota Access pipeline, The Guardian revealed last month.

After examining Trump campaign filings to the U.S. Federal Election Commission, the British outlet reported that “the Republican nominee has between US$500,000 and $1 million invested in Energy Transfer Partners,” the Houston-based consortium building the pipeline. The president-elect also has “a further $500,000 to $1 million holding in Phillips 66, which will have a 25% stake in the Dakota Access project once completed.”

The president-elect’s stake is considerably smaller, however, than the nearly 40% of the project held by Calgary’s Enbridge Inc..

Meanwhile, the Minneapolis Star Tribune reports that Energy Transfer Partners has offered to pay North Dakota for the estimated $10 million cost of employing state and local police to help force the pipeline though resisters who have been camped near its route for several months.