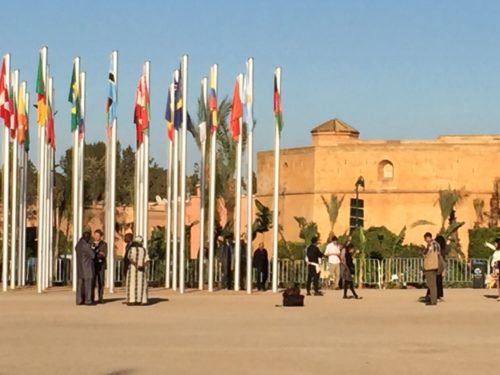 An estimated 80 heads of state attending the UN climate conference in Marrakech this week are working their way through an updated version of the Marrakech Action Proclamation for Our Climate and Sustainable Development, a near-final draft that affirms the urgent need for global action but sidesteps the major climate finance challenges bedevilling conference delegates.

Climate Home decodes the Proclamation as a message to U.S. President-elect Donald Trump. The Business Standard of India casts it as a partial victory for developing countries as negotiations continue.

“Our climate is warming at an alarming and unprecedented rate and we have an urgent duty to respond,” the statement acknowledges. “We call for the highest political commitment to combat climate change, as a matter of urgent priority.”

The statement calls for “strong solidarity with those countries most vulnerable to the impacts of climate change,” and acknowledges the need to “support efforts aimed to enhance their adaptive capacity, strengthen resilience, and reduce vulnerability.” It shines a light on the need to eradicate poverty, boost food security, and make agriculture more resilient, and calls for “urgently raising ambition and strengthening cooperation amongst ourselves to close the gap between current emissions trajectories and the pathway needed to meet the long-term temperature goals of the Paris Agreement.”

The statement urges “an increase in the volume, flow, and access to finance for climate projects, alongside improved capacity and technology, including from developed to developing countries.” But as delegates arrived at Marrakech’s Bab Ighli conference Wednesday morning, less than 72 hours before the scheduled end of what was billed as the Action COP, there was no public indication that negotiators had found a pathway to the $100 billion per year in climate finance, beginning in 2020, that developed countries promised developing nations in 2009—or to the additional dollars that will be needed to help vulnerable countries adapt to climate change.

That appears to be a disappointment for the United Nations Environment Programme (UNEP), which was out yesterday with a gap report that pointed to the need for $300 billion in adaptation finance in 2030, increasing to $500 billion by 2050.

“Developed countries should do all they can to increase and accelerate their support to developing nations trying to adapt to the damaging impacts of climate change,” the agency stated in a release. “UN Environment’s Adaptation Finance Gap Report 2016 shows that the cost for developing countries of adaptation alone could range from $140 billion to $300 billion by 2030, and from $280 billion to $500 billion by 2050—up to five times higher than previously estimated.”

“The world has promised to help developing countries adapt to the disruption and hardship caused by changes such as altered rainfall patterns and rising sea levels,” said UNEP Executive Director Erik Solheim. “We must keep that promise, narrow the adaptation finance gap, and prevent it from widening further by redoubling our efforts to stabilize the world’s climate.”

Yesterday’s sessions brought good news, as well, with the 47-member Climate Vulnerable Forum joining with the Moroccan government, in its capacity as COP President, to host an event on the transition to a 100% renewable energy economy.

“Renewable energies do not only mitigate our impact on climate change but open the way to new models of sustainable development with new investments, new industries, and new jobs,” said COP22 President Salaheddine Mezouar. “We should all embrace the opportunities offered by the development of renewable energies.”

“Citizens, cities, and communities around the world are the ones who pioneer the global 100% renewable energy movement, a prerequisite for keeping the world below the 1.5° benchmark” in the Paris Agreement, said the World Future Council’s Stefan Schurig. “They need our full support, especially in times when national elections are won on the basis of unacceptable and populistic arguments.”

“Being able to harness power from the wind and the sun is one of the greatest achievements of human ingenuity. It’s such a fundamentally profound breakthrough that we sometimes fail to grasp its potential,” added Christian Aid International Climate Lead Mohamed Adow. “The fact that it also happens to be our only route out from the climate catastrophe we have made for ourselves only adds to its immense value.”

“We are bringing the voices of Arab people to this conference, calling for a world powered by 100% renewable energy. They are just some of the millions around the world who know that this is the only way to meet the goals of the Paris Agreement.” said Greenpeace International Executive Director Jennifer Morgan. “We are the generation who will end fossil fuels.”

This week has also seen the first release of a national strategy aiming toward total decarbonization by mid-century. The Paris Agreement sets a 2020 deadline for countries to let each other know what they plan to do, and Germany was first out of the gate, after its Parliament approved a plan to reduce emissions 80 to 95% from a 1990 baseline by 2050.

Lutz Weischer of Germanwatch welcomed the plan in a news conference Monday afternoon, noting that it reflected wide engagement across sectors of society and called for action by all branches of the German government. It defines sectoral emission reduction targets through 2030 and acknowledges the country’s obligation to double international climate finance by 2020.

On the other hand, Germanwatch’s analysis shows that the 80-95% target “is not adequate to reach the Paris goals of well below 2°C” by mid-century, Weischer said. The NGO’s analysis says Germany must hit at least 95% by 2050 at the latest, and while the government panel acknowledged carbon neutrality as the country’s ultimate goal and set tough sectoral goals for 2030, its report “doesn’t include measures yet and won’t be sufficient to meet the targets in those sectors.”

On Monday, as well, a senior Canadian government official participated in a panel on long-term decarbonization strategies, alongside counterparts from Mexico and the United States. “We should not be drug pushers of fossil fuels to the rest of the world,” Earth Institute Director Jeffrey D. Sachs told the panel, warning that fossil producers and their allies in countries like Australia, Canada, and the United States might dream of decarbonizing their own economies, then making a living selling coal, oil, and gas to other countries.

“In case it’s not clear, this will not be well received,” Sachs said, in wrap-up remarks that drew applause from a packed conference hall and from panelist Rodolfo Lacy Tamayo, Mexico’s deputy secretary of environment. “It’s very important that we get this right.”