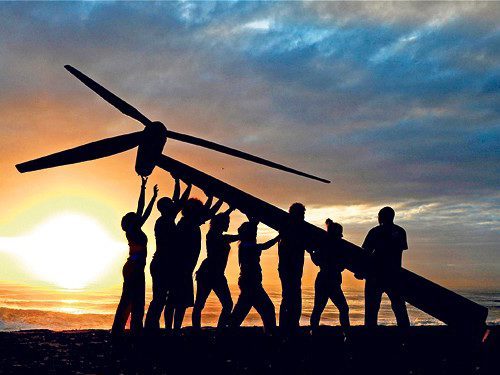 Here’s a contrarian thought: A President Donald Trump might actually be good for the climate and clean energy. Really: at least that’s what some observers are think and saying.

“Trump might accidentally decrease global emissions,” suggested CleanTechnica, for one. “An isolationist, trade-hostile USA could be a drag on the global economy. While emissions have decoupled from GDP growth over the past several years, that doesn’t mean emissions aren’t strongly correlated to global GDP. If the world’s economy falters, less coal, oil, and gas are burned. This is the wrong way to solve the problem, but don’t rule it out.”

Another way Trump could unintentionally put a crimp in emissions: a less adventurous war policy. “By many counts, the U.S. military is the single largest emitter of CO2 in the world,” CleanTechnica adds. “If Trump does avoid intervening militarily, the U.S. military will sit at home and not burn as much diesel shifting soldiers around, and their emissions will go down.”

(Among the lesser-known features of the Paris Climate agreement was that it closed a loophole in national emissions accounting that exempted releases resulting from military activity.)

Australian cleantech news site RenewEconomy has a slightly more complicated, counterintuitive argument that doesn’t rely on a global recession or American retreat from global policing to see a Trump-inspired, anti-renewable business climate in the United States driving the uptake of distributed generation.

The logic works like this. A President Trump may encourage utilities to hasten the abandonment of feed-in tariffs for distributed photovoltaic generation, and to continue charging those customers more for the backup power they need. The result will be a widening gap between the value of the electricity that homeowners and others sell to central utilities and the price they pay to buy electricity after dark.

That gap, together with the falling price of battery storage, represents a market opportunity at what Deutsche and RenewEconomy call an “inflection point” in the technology’s penetration.