‘THIS WILL NOT BE WELL RECEIVED’: Don’t Be a ‘Drug Pusher’ on Keystone, Canadian Panelist Hears at COP 22 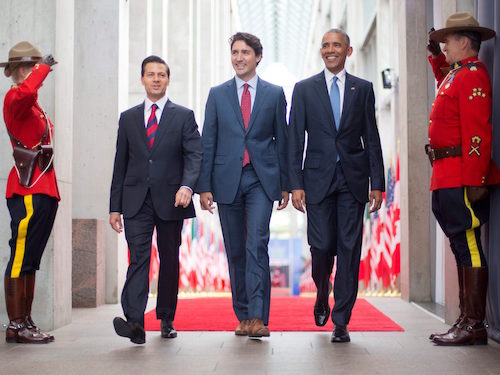 “We should not be drug pushers of fossil fuels to the rest of the world,” Sachs said.

Fossil producers and their allies in countries like Australia, Canada, and the United States might dream of decarbonizing their own economies, then making a living selling coal, oil, and gas to other countries, he added, in wrap-up remarks that drew applause from a packed conference hall and from panelist Rodolfo Lacy Tamayo, Mexico’s deputy secretary of environment.

“In case it’s not clear, this will not be well received. It’s very important that we get this right.”

“Obviously, the U.S. can import hydropower from Canada, and can import a lot of Sonora sunshine from Mexico,” Sachs said today. “But I just want to make sure Keystone has no place in this three-nation scenario. Maybe you could confirm that?” he asked Stephen Lucas, senior associate deputy minister at Environment and Climate Change Canada.

Lucas declined to answer Sachs’ specific question. He said the “critical message we’ve been stressing both at home and abroad” is that Canada sees environmental protection, investments in climate action, fulfilling its Paris commitments, its work on deep decarbonization, and the drive to a low-carbon economy as elements of “a critical hand-in-hand relationship we’re working on.”