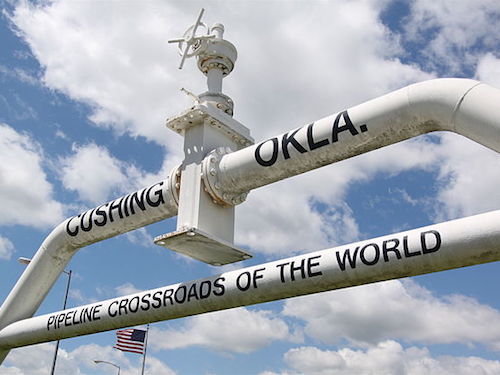 The other earthquake in the United States this week was physical: a 5.8 magnitude tremblor that hit Sunday evening, less than 1.6 kilometres from what Bloomberg calls “arguably one of the country’s most important strategic assets—the largest crude oil trading hub in North America, with almost 60 million barrels of stored crude,” near Cushing, Oklahoma.

More disturbing for Oklahomans, the outlet adds, the event “raises questions over the state’s ability to do anything about the significant rise in earthquakes, which has been linked to oil and gas activity.”

The Midwest state had known only rare earthquakes until 2008, when it experienced two. Last year, quakes registering at least 3.0 magnitude shook the state nearly once every eight hours. But when earthquake activity approaches the vast tank farms of Cushing, posing a threat to the country’s major oil supply and distribution hub, “they suddenly become an issue of national security,” the news service asserts.

“Seismologists believe the quakes are the result of wastewater injection wells used by the oil and gas industry” to pump more than a billion barrels a year of brine laced with heavy metals—produced along with extracted oil—back underground. “From 2009 to 2014,” Bloomberg notes, “disposal volumes shot up 81%.”

Last year, state officials placed limits on the amount of wastewater disposal wells could inject, and the number of daily quakes fell by half. “It’s the closest thing we have to a smoking gun,” said Jeremy Boak, director of the Oklahoma Geological Survey. After the latest quake, regulators ordered more wells to shut, Reuters reports.

But the pattern of quakes has revealed the limited effect of the new rules. “For about six months, the story was that these restrictions were working,” Dan McNamara, a U.S. Geological Survey research geophysicist in Denver, told Bloomberg. “Then the 5.8 hit. The small events may be trending down, but the frequency of the largest ones is going up, and that is what’s troubling about this latest cluster of activity, particularly around Cushing.”

Two years ago, McNamara discovered “a fault line directly beneath Cushing’s enormous oil tanks that was previously unknown to geologists—the same fault that was activated on Sunday,” adds the outlet. The 46.3-million-barrel facility is the world’s largest oil storage operation.

And now, the Denver geophysicist adds, it’s probably too late to stop Oklahoma shaking even it were to halt wastewater injection entirely. Years of fracking and injection into the state’s fractured rock foundations have created pressures that will continue to generate “many, many years of earthquakes as that energy dissipates through the system.”

This time, at least, the earthquake did not interrupt activity at the oil hub, which was open for business last Monday.