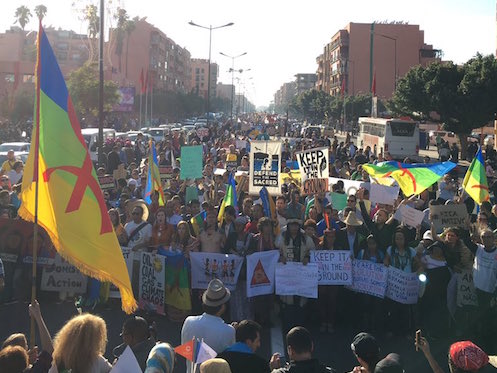 'This is amazing. People as far as the eye can see on the streets of Marrakech demanding more from #COP22. #ZeroFossil #KeepItInTheGround.' - Oil Change International/Twitter

U.S. President-elect Donald Trump will only hurt his own country if he follows through on swirling rumours that he will withdraw his country from the Paris Agreement, or from the UN Framework Convention on Climate Change under which it was negotiated, according to analysis by Climate Action Network International during this year’s UN climate conference (COP 22) in Marrakech.

“If the Trump administration does decide to cede leadership and credibility on an issue of such surpassing global importance, others are ready to take its place,” states this morning’s edition of ECO, CAN-I’s daily COP newsletter. “China has said it is prepared to have a stronger voice—and to reap the rewards in terms of international standing, good will, and global influence that will surely accrue.”

If Trump abandons the field on climate, Zou added, “China’s influence and voice are likely to increase in global climate governance, which will then spill over into other areas of global governance and increase China’s global standing, power, and leadership.”

Earlier today, in his first post-election phone call with Trump, Chinese President Xi Jinping said cooperation between the two countries is their only option, according to Chinese state media. “‘The facts prove that cooperation is the only correct choice for China and the United States,’ China Central Television (CCTV) cited Xi as telling Trump,” Reuters reports.

Although a pullout by the U.S. federal government “would certainly be a major setback,” ECO acknowledges, “one of the great strengths of the Paris Agreement is that it was built to withstand such an isolated, short-term political setback, even by the world’s second largest emitter.” The Trump rumours didn’t even make the lead story in ECO’s daily lineup—the newsletter opened with a letter to the 80 heads of state and government ministers from around the world who are descending on Marrakech as COP 22 enters its second week.

“Ministers, you came to Marrakech to spell out the necessary details of the decisions taken in Paris, and by doing so seek to underpin real climate action at home,” that letter states. “You came to tell fellow ministers how, inspired by the Paris Agreement, you have taken immediate further action, so that the ambition gap can be closed. This early action is essential to achieving the Paris goal of limiting warming to 1.5°C.”

The Reuters report Friday picked up concern that the absence of a U.S. federal presence from international climate finance arrangements under the Paris deal would prompt other countries to ratchet down their own efforts. But less than a week after the U.S. election, reaction by COP delegates is already demonstrating the Paris deal’s resilience.

“No country has said it would follow the U.S. out of the Agreement,” ECO notes. “Quite the contrary, many countries and groups, including China, the EU, Japan, Saudi Arabia, the Least Developed Countries, the High Ambition Coalition, and others have all reconfirmed their commitment to continue to take aggressive climate action under the Agreement. Others such as Australia, Pakistan, and Italy have even joined the Agreement in the days since the U.S. election results came in.

“In so doing, they have sent a resounding message that the countries of the world will forge on, with or without the U.S.”

Indeed, it’s the U.S. that will be hurt if Trump follows through on his promise to withdraw his country from the response to a global crisis he considers a hoax manufactured by China. “Withdrawing from the Paris Agreement would do considerable damage to the U.S.’ global standing and credibility,” ECO warns. Countries have “clearly shown” that “climate change is now a core national interest and a top-tier diplomatic priority. By abandoning the global effort to contain the climate crisis, the Trump administration would severely undermine its ability to achieve any of its other diplomatic priorities. The Bush Administration discovered this when it left the Kyoto Protocol.”

COP participants have also been focusing on the role that U.S. states, cities, businesses, and civil society are already playing to reduce the country’s greenhouse gas emissions. Back home, InsideClimate News picked up a report that “a slim chance that the United States, propelled by market and popular choices, could achieve Obama’s international pledge to cut emissions up to 28% by the year 2025” even with Trump in office.

On Friday, the High Ambition Coalition affirmed that: “The Paris Agreement marks a turning point towards a more prosperous and stable world. Acting on climate change is in all of our national interests—it is good for our environment, good for our economies, and good for our climate security. Our commitment to be climate leaders remains steadfast, as is our commitment to work with the whole international community, including the United States, to tackle one of the greatest challenges of our time.”

The 100-member Coalition first emerged last year at a crucial point in the historic Paris conference, to help push negotiations toward a successful global deal. The latest statement is signed by representatives of the Marshall Islands, the European Union, France, The Gambia, Germany, Mexico, Morocco, Norway, Saint Lucia, Sweden, Bangladesh, and the 48 members of the Least Developed Countries bloc, currently chaired by the Democratic Republic of Congo.

As the first week of the conference closed, Conference of the Parties President Salaheddine Mezouar of Morocco met media to stress delegates’ “positive commitment” to a good outcome from a meeting that has been billed as the “Action COP”. The number of countries ratifying the Paris deal now stands at 106, he said, adding that the Moroccan Presidency will work over the next week to create a bridge among negotiators for climate action and pull in the “non-state actors”—from subnational governments and cities, to businesses and civil society—whose actions are already amping up Paris implementation.

During its year as COP president, Morocco is also putting a lot of emphasis on measures to increase public finance for climate mitigation and adaptation in developing countries, and on innovative methods to mobilize private sector dollars.