A Longer Arc: How We Win on Climate and Energy 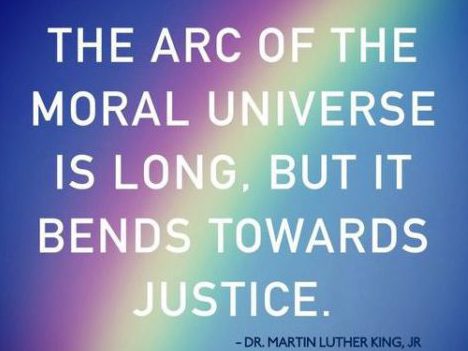 MARRAKECH—In one of his most revered moments, the great U.S. human rights leader Martin Luther King said: “The arc of the moral universe is long. But it bends toward justice.”

After the wrenching events of Tuesday night, that fundamental truth is unchanged. We just now know that the arc will be a bit longer, its pathway for climate solutions and climate justice more complicated.

That’s what came to me Wednesday morning, as we all arrived at the Bab Ighli conference compound in Marrakech for Day 3 of this year’s United Nations climate change conference. I saw nothing but remarkable courage, professionalism, resolve, and determination as friends and colleagues from around the world lifted each other up, then got on with the job that had brought us here.

Pushing the Paris Agreement toward implementation.

Ensuring adequate climate finance for the world’s most vulnerable countries and regions.

Insisting on a more equal balance between efforts to speedily reduce greenhouse gas emissions and the equally powerful imperative to help vulnerable countries adapt to climate change, and gain compensation for impacts to which they will not be able to adapt.

Assuring fairness for people already living and sometimes dying with the worst impacts of climate change, and a just transition for generations of fossil workers stuck in an industry that is hurtling toward its sunset.

Getting Back to Work

I saw colleagues who’ve devoted their lives to this fight of our lifetimes, people who were dying inside as they absorbed the result from across an ocean, articulating a set of coherent, practical pathways to the global climate solutions that have become an increment more complicated, but no less urgent or essential.

In meeting halls and negotiating rooms across the sprawling Bab Ighli complex, diplomats and policy specialists, scientists and civil society representatives, got back to the meticulous, painstaking, and necessary work of hammering out the details that will give life to the spirit of Paris.

And from all of that work, what quickly dawned was the realization that very little has actually changed for the Paris Agreement, or for the global fight to bring climate change under control. Not to understate the four years of toxicity, division, and grief ahead for friends and colleagues in the United States—but on a global scale, governments change all the time, and matters of broad global policy and consensus keep on rolling. As will the Paris Agreement.

“No one government and no one head of state can stop the global momentum to confront climate change, implement the Paris Agreement, and set a course to hold long-term global warming below 1.5°C,” Catherine Abreu, executive director of Climate Action Network Canada, told global media at a news conference Wednesday morning. (Disclosure: I’m onsite at the COP this year managing communications for Climate Action Network Canada.)

“All of us at COP 22 understand the environmental imperative of acting on climate change and cutting climate pollution, but the economic imperative to get off fossil fuels is clearer than ever,” Abreu added. “The world knows that a prosperous future is one run on clean energy,” and “these actions serve our national interests and regional interests just as much today as they did yesterday.”

And that’s not the only thing that changed only slightly, or not at all, in the wake of the U.S. election.

Before Tuesday, for most of us working on climate change and energy, the dominant sentiment was hope for the powerful momentum that has built in recent years, but always with an undercurrent of urgency and fear for what will happen if the transition falls short. Wednesday morning, fear and revulsion trumped hope.

So. Job One for the climate and energy community is to get the right balance back. First to steady our own hands and hearts. Then to do our part to help our family and friends, colleagues and communities, clients and partners, usual allies and unusual suspects, pick themselves up and get back to the job of building a decarbonized, green energy future.

Something fundamental that has not changed: “Awfulizing” doesn’t help. It is just as powerful a paralytic now as it was last week at this time. And it is still a matter of deep communications malpractice if we allow a storyline of fear and futility to immobilize the communities and audiences that have to engage as never before to get this work done.

• There’s a peculiar view emerging in some media analysis that a global climate deal involving 196 countries can grind to a screeching halt if one of those parties steps away from the table. The reality is that the Paris Agreement will be implemented, with or without the new U.S. president. Countries around the world will see massive economic, job creation, health, security, and resilience gains by ushering in the green energy economy, whether or not the U.S. chooses to join in. Paris was ratified faster than any other international treaty in modern history, for the blindingly simple reason that it’s in every country’s essential interest to get climate change under control and reap the benefits of doing so. Out here in the real world, outside the confines of his own imaginative narcissism, that reality and the resulting momentum are both bigger than Donald Trump.

• Trump won’t be able to stop, and on a global scale he won’t be able to slow down, the meteoric rise or plummeting cost of renewable energy, energy efficiency, and energy storage technologies that now represent an integrated, low-carbon alternative to almost all elements of the fossil economy. Solar and wind energy are now routinely beating coal, natural gas, and certainly nuclear in competitive bids, and that price spread will only widen during Trump’s four years in office.

• As U.S. colleagues pointed out in one of Wednesday’s news conferences in Marrakech, Donald Trump will be able to tilt his country’s laws, but he can’t change the laws of physics. Just weeks ago, Oil Change International documented the limited atmospheric space remaining even for existing fossil fuel infrastructure, much less new projects.

• If the Trump administration chooses to ignore that reality, it will find itself increasingly isolated from potential trading partners that are determined to address the climate crisis, implement the Paris agreement, and set legislation, policies, and investment standards to match. Within hours of the election result, we were already hearing about countries and blocs for which it’s self-evident—as it should be—that climate change will be high on the agenda when they engage diplomatically with the U.S.

• The fossil economy has been driven down as effectively by two years of low oil prices as it has been by competing clean energy technologies or by climate and clean energy activism. And—need it even be said—Donald Trump doesn’t get to dictate the global price of oil. (Hell, not even Vladimir Putin can do that.) U.S. policy can influence it, but not in the way the incoming president might want to. If he carries through on his musings about appointing a fossil fuel magnate to oversee a new shale boom as energy secretary, success will mean driving up supply, extending the glut, and undercutting prices for U.S. and other producers while the rest of the world continues to decarbonize its energy systems and further erode fossil demand.

• Trump can issue a presidential permit for the controversial Keystone XL pipeline, and TransCanada Corporation is apparently giddy with the expectation that he’ll do just that. But the United States president can’t manufacture demand for the product that flows through the pipe or fix a price that will keep TransCanada and its customers solvent over the decades-long life of the infrastructure.

• Nature abhors a vacuum, and the need for climate action is too urgent to permit one. So if the U.S. Executive Branch and Congress abandon the climate space, watch for state and city governments, businesses, and so-called “non-state actors”—that’s COP-speak for non-profits, charities, and other civil society organizations—to step into the breach. Canada had a particular window on what may be ahead for the U.S., during nearly a decade of rule by a government that was dismissive of climate science and hostile to climate solutions. Four of our provinces representing about 80% of our population introduced some form of carbon price, and several of our largest cities emerged as climate and energy leaders.

I’ve been working hard these last two days not to be consumed by a sense of déjà vu. (S’okay…it’s working.) In mid-October 1980, as a junior reporter with Canadian Renewable Energy News, I leapt at the opportunity to attend the Fifth National Passive Solar Conference in Amherst, MA. It was the aftermath of the first OPEC oil crisis, the height of the Carter administration’s renewable energy initiatives, and an incredibly exciting place to be.

There were five regional solar energy centres run by the U.S. government.

Earth Day founder Denis Hayes was in position as the youngest-ever director of a U.S. national laboratory at the Solar Energy Research Institute, the awesomely effective agency now known as NREL.

The National Center for Appropriate Technology was churning out insights and options from its lab in Butte, Montana.

An emerging national council was creating an institutional home for low-energy homebuilders.

Amory Lovins had already begun publishing his work on what has since morphed into deep decarbonization strategies, and we knew we could get the transition done by 2025.

And yet, we also knew we were the walking dead. To get to sessions from the university dorms each day, we had to pass the flags at half mast, recognizing the 66 American hostages in an embassy in Tehran. And we knew that Ronald Reagan, his generation’s equivalent of a reality TV star, would be the next American president.

The CEO of Solar Lobby said he wasn’t worried: in an interview that now dates back three dozen years, he said he was satisfied that if Reagan was serious about creating a “level playing field” for all forms of energy, renewables could compete head to head against fossils and nuclear, and win.

In his first budget, Reagan went all-in on synthetic fuels and sought to reduce federal renewable energy spending by 93%. (Remember that the next time anyone tries to tell you that renewables have been over-subsidized, anywhere, ever.)

Then, the industry and the surrounding community were too new, too formative, too far from global consensus to survive the onslaught.

I don’t remember anyone ever promising us that this would be easy. I wish they had, and it just got a bit more difficult. But we can and will still get this done. Spending these last few days in Marrakech, in the presence of some of the world’s most experienced, knowledgeable, effective, and brilliantly committed climate hawks, turns out to have been the best way to keep that in perspective.