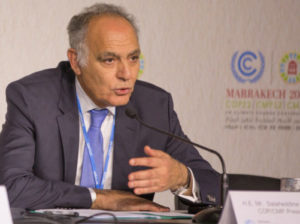 The United Nations climate change conference got under way this morning in Marrakech, Morocco with a moment of celebration that the Paris Agreement has entered into force so much faster than expected, coupled with a push for faster, deeper carbon cuts beginning before 2020.

But the conference, shorthanded as COP 22, convened amid tough questions about fossil fuel lobbying onsite, an activity that contrasts wildly with the climate impacts already facing the world’s most vulnerable countries and regions.

“Political momentum to combat climate change has grown remarkably since 195 [countries] adopted the Paris Agreement last December,” Climate Action Network-Europe observed in a November 2 media briefing. Now, “action before the year 2020 is a prerequisite for reaching the long-term goals of the Paris Agreement. In Marrakech, discussions on how to undertake radical action in the coming years will be a priority, and the Moroccan presidency of the Conference will seek concrete contributions from all countries.”

But pre-COP media reports showed that not everyone gathered at the Bab Ighli compound in Marrakech will be driving toward the same objectives. The Guardian reports that the COP is convening “with the unprecedented involvement of corporate interests who have fought climate action around the world, funded climate change denial, and whose fundamental interest is in extracting and burning as much fossil fuel as possible.”

A chart produced by Corporate Accountability International documents the

pathways that will give companies like ExxonMobil, Chevron, Peabody, BP, Shell, and RioTinto “unquestioned access to most discussions in Marrakech,” writes The Guardian’s Michael Slezak. The fossils “will be called upon for advice, and will be walking the corridors and holding private discussions with countries that are trying to move the world to stop consuming the products those companies have based their businesses on.”

It didn’t have to be that way, Slezak notes. “Earlier this year, desperate moves from countries representing the majority of the world’s population to examine how the UN might identify and minimize conflicts of interest were swept under the carpet by rich countries—especially the U.S., EU and Australia—who argued they wanted to be as ‘inclusive’ as possible and that the concept of ‘conflict of interest’ was too hard to define.”

An analysis by rich countries suggested they are well on their way to delivering the $100 billion in climate finance they promised to developing countries by 2020. But an Oxfam International report “shows that of the $41 billion per year that rich countries reported, the net worth specifically targeting climate action was just $11 to $21 billion,” the organization stated last week. “Of that, just $4 to $8 billion was earmarked to help poor countries adapt to the impacts of climate change, far short of what’s needed.”

“Climate change is already hitting people,” said Oxfam climate specialist Isabel Kreisler. “Droughts have killed crops; sea level rise has destroyed homes. These kinds of climate shocks, combined with a ‘super’ El Niño, have left around 60 million facing hunger this year alone. The people most vulnerable to these effects are the least responsible for causing climate change. They need help to adapt to their new reality, but are still not getting it at the scale needed.”