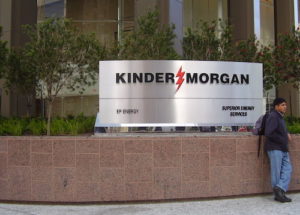 Kinder Morgan Canada President Ian Anderson may think he’s just not smart enough to sort out climate science. But a federal review panel is getting good reviews for its own smart assessment of the pipeline’s consistency, or lack thereof, with the Trudeau government’s climate, Indigenous reconciliation, and environmental assessment commitments.

On the same day that Anderson’s tongue, or reserve, slipped, in an address to the Greater Vancouver Board of Trade, the three-member panel assigned earlier in the year to review the National Energy Board’s May approval of the Trans Mountain expansion reported the embattled federal agency had failed to make the public interest case for the project. Among other weaknesses, it concluded the energy regulator “failed to adequately consult First Nations, and recommended approval of a major west coast pipeline without enough evidence that it was in the public interest.”

Whether or not it is in the interest of Canadians to allow the Texas company to triple the capacity of its existing 1,150-kilometre pipeline, at a cost of C$6.8 billion, to pump 890,000 barrels a day of diluted bitumen from near Edmonton to Vancouver Harbour, was a question the panel ducked.

Its members left Prime Minister Justin Trudeau and his cabinet to resolve what it called “among the most controversial [dilemmas] in the country, perhaps in the world, today: the rights of Indigenous peoples, the future of fossil fuel development in the face of climate change, and the health of a marine environment already burdened by a century of cumulative effects.”

Instead, reports JWN Energy, “the panel identified six high-level questions for the federal government to consider” before making its decision.

Those questions pointedly included whether construction of a new Trans Mountain pipeline can be reconciled with Canada’s climate change commitments, and how, “given the perceived flaws in the NEB process, and the criticism of the ministerial panel’s own review,” Canadians can be confident in its assessment of the project’s rewards and risks.

The panelists’ findings lent support to a growing number of analyses that have questioned the project’s economic rationale in light of persistently low oil prices. And they can be expected to add fuel to efforts to prevent the pipeline receiving final approval.

In addition to leak risks along its route (where the line has ruptured previously), the original NEB decision conceded that even without a marine spill, the resulting increase in tanker traffic between Vancouver’s enclosed harbour and the Pacific Ocean would further harm the severely at-risk local orca whale population.

Critics also faulted the Board’s original decision for failing to consider the climate implications of the additional greenhouse gas emissions arising from tripling the volume of oil it would transport for combustion, and those associated with the expansion of tar sands/oil sands crude production to fill it.

Some critics of the pipeline sought to delegitimize the latest review panel’s conclusions before they were revealed. “The NEB review of Kinder Morgan was hopelessly biased towards corporate interests and excluded public participation, environmental impacts, and climate change impacts from its deliberations,” said Sierra Club of B.C. spokesperson Caitlyn Vernon, in a joint statement with Environmental Defence and Équiterre.

Separately, a group of doctors from across Canada urged the federal government to call an entirely new review of the project, this time to assess its cumulative health impacts. And the inability of response crews to contain a relatively small diesel fuel spill north of Vancouver Island called into question assurances that a “world class” clean-up capacity exists to contain a far larger release from a fully-loaded tanker in the region.

Nonetheless, the political pressure on the Prime Minister to approve the pipeline is intense. Alberta Premier Rachel Notley has explicitly linked her province’s support for the federal government’s proposed national minimum carbon price to the approval of at least one pipeline from the landlocked province to tidewater. Of two other current proposals to do that, one is approved but moribund after its sponsor—Enbridge Inc.—declined to start work in time. The other—TransCanada’s Energy East line—fell into limbo when an NEB panel considering the company’s application was forced to recuse itself after meeting improperly with one of the company’s lobbyists.

Natural Resources Minister Jim Carr, accepting the panel’s report on the same day that Anderson made his controversial statement, indicated the federal government is prepared to override at least some objections to the Kinder Morgan route.

Notwithstanding the Liberal government’s multiple overtures promising a new relationship with First Nations, Carr said Ottawa “will not require consent from First Nations as it makes a decision” on Trans Mountain, the Globe and Mail reported.

Those political considerations have prompted at least one prominent columnist to predict that approval is in the bag for Kinder Morgan, whatever British Columbians, largely opposed to its project, feel.

At the Greater Vancouver Board of Trade, meanwhile, Anderson revealed that he is a climate science doubter, if not denier, maintaining that he’s not “smart enough” to understand the scientific consensus of the world’s earth systems scientists. The assertion prompted widespread derision and a prompt “clarification” from Kinder Morgan.

“Anderson said there are two distinct paths of climate science and he wouldn’t ‘judge one path versus the other,’” the Observer reports. “We won’t all agree on the science or the degree to which man influences greenhouse gases and climate change,” the outlet reported Anderson saying, adding that, “I’ve read the science on both sides and don’t pretend to be smart enough to know which is right.”

Climate scientist and B.C. Green Party leader Andrew Weaver told CBC News the statement was indefensible, noting that there are no two “sides” to climate science. Rather, as CBC put it, “there is ideology on one side and science on the other.”

“The fact that [Anderson] could say he’s read the science on both sides,” Weaver said, “suggests to me he doesn’t understand what science is.”

Kinder Morgan later issued a release, attributed to Anderson, in which he explained: “There should be no misunderstanding. Climate change is real. Fossil fuels lead to higher CO2, which in turn contributes to climate change.”

The Observer’s Hamish Stewart warned that for “corporate directors like Ian Anderson, who seek to deny the material business implications of climate science and associated industrial and technological shifts, the risk of shareholder lawsuits seems almost inevitable.”