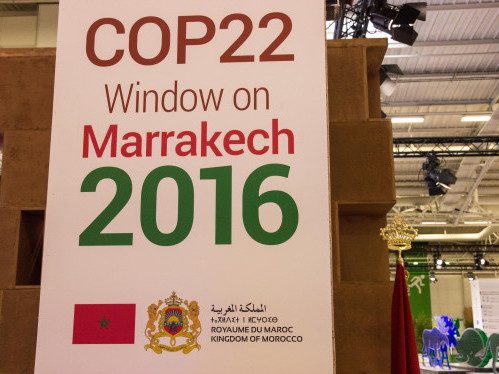 As delegates gathering in Marrakech for the annual United Nations climate conference celebrated today’s entry into force of the Paris Agreement, the international milestone was met by a stark reality: countries have three years to boost their carbon reduction commitments, or see a 2.0°C limit on average global warming slip beyond humanity’s reach.

The warning comes from the latest in an annual series of UN Environment Programme reports that now tracks the “emissions gap” between the goals of the Paris Agreement and its signatories’ emission reduction commitments to date.

“Each year’s gap report, produced by expert scientists using the latest available data, makes clearer than ever that the treaty commitments undertaken so far fall short of what is needed to keep warming below the UN’s targets,” InsideClimate News reports. This year, UNEP is warning “that unless reductions in carbon pollution from the energy sector are reduced swiftly and steeply, it will be nearly impossible to keep warming below 2.0°, let alone to the 1.5° aspiration.”

Based on carbon commitments to date, the report places carbon or equivalent emissions at 54 to 56 gigatonnes in 2030, BBC notes. “The authors say this is far above the 42 gigatonnes needed to have a good chance of staying below 2.0°C by the end of the century, and a long way from the 39 gigatonnes needed to keep to 1.5°,” in line with the Paris target.”

The UNEP authors say the annual increase in emissions was just beginning to slow as of 2013, after a period of alarming increases. The current pace would lead to 2.9 to 4.0°C average warming by 2100.

On Climate Home, correspondent Ed King says Marrakech will be the first indication of how seriously countries plan to take their Paris commitments.

“It’s one thing to sign off on a piece of paper that says you need to limit warming to well below 2°C, quite another to see policies implemented at national and regional levels to make it happen,” he writes. “The COP22 summit in Marrakech, Morocco will be an early taster of the appetite governments have to meet what is a huge challenge: decarbonizing the global economy and ensuring we meet a goal of zero net emissions in the second half of the century.”

The good news, King notes, is that “investments in renewables tipped $280 billion in 2015, with global capacity of solar, wind, and other clean energy sources topping coal,” according to International Energy Agency figures. But “it’s the pace of carbon cuts that’s the issue, and national targets still don’t add up to the UN’s 2°C goal.”

In the early days of the Marrakech conference, meanwhile, King predicts that all eyes will be on the United States presidential election, where polls show a tightening margin of victory for ex-Secretary of State Hillary Rodham Clinton over reality TV star Donald Trump. [Editor’s note: Have I really just written those words??]

“This means the first couple of days in Marrakech will be cagey,” King writes. “We’ll have the usual platitudes as the talks open on the 7th, and then watch 194 countries collectively hold their breath as the U.S. public heads to the polls.”

A policy assessment by Lux Research concludes this week that a Trump presidency would result in 3.4 billion tonnes more greenhouse gas emissions than a Hillary Clinton administration, CleanTechnica reports. “Climate change hasn’t been front-and-centre in media coverage of this election, but voters should be aware of the implications of their choice on this important issue,” said analyst Yuan-Sheng Yu.