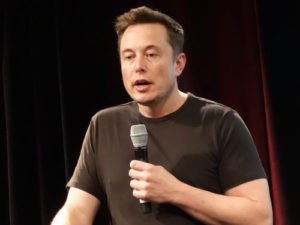 “Beyond his promise that the Tesla roofs would cost less than traditional ones over time,” notes Utility Dive, “Musk offered no pricing or efficiency details, [and] no insight as to how power contracts with consumers would be structured.” Currently SolarCity, the rooftop solar company run by Musk’s cousins that he is trying to merge with Tesla, “typically guarantees solar output for 20 years, but most roofs are expected to last longer.”

And while Musk boasted that the updated Powerwall2 storage battery Tesla proposes to twin with its new roof would provide twice as much energy as its predecessor, and be about 40% cheaper based on that capacity, neither he nor the company released details about its expected efficiency or cycle life. The latter metric—how many times the battery can be drained and recharged—is critical to the useful life of the system.

Musk is also banking on his company’s innovation being able to buck both the competition and a trend of previous failures in the product category. “There are a number of companies installing integrated solar roofing projects,” Utility Dive notes, “including SunTegra and Solarmass. There’s also a sizeable list of high-profile failures, like SunEdison’s Ready Solar and PV shingle offerings from Dow Chemical and PV.

“Elon checked one box of his stated goal,” Greentech Media observed. “Yes, the solar shingles look pretty. They come dressed up as French slate and Tuscan clay tiles, and through clever manufacturing they don’t even look like solar cells when viewed from a low angle.”

But the rest of Musk’s claims “are still up in the air,” it added, “and he failed to address any of the serious, foundational challenges facing a car-company-turned-battery-and-solar-installer that wants to get a roof product to market.”