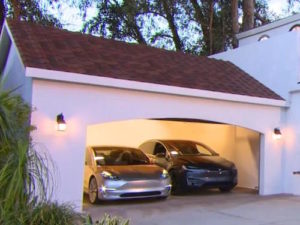 “The solar panels resemble traditional roofing tiles, and Musk said they are designed to cost less than a traditional roof plus the cost of electricity and last longer,” Utility Dive reports. “The new roof system would integrate with the Powerwall 2.0 battery system, which Musk said could power the refrigerator, sockets, and lights of a four-bedroom house for a day—or indefinitely when combined with rooftop solar. Musk touted a future where everyday consumers would have an electric car, a battery, and a solar roof on their home.”

The product’s success will depend on a November 17 vote, where shareholders will decide the fate of Tesla’s proposed merger with SolarCity, a company owned by Musk’s cousin, Lyndon Rive, and whose board of directors Musk chairs. “Musk warned in his master plan this summer that the integrated offering would be impossible as two separate companies,” Utility Dive notes, adding that the standalone Powerwall product initially had trouble integrating with SolarCity panels.

The impact on the wider solar+storage market remains to be seen. “Third party developers like AES and Sunrun use Tesla batteries for commercial battery and solar-plus-storage offerings,” writes UtilityDive correspondent Gavin Bade. But “if Tesla Energy follows a similar model to its vertically-integrated car company, it could cease selling batteries to third parties.”

As for the pre-existing power distribution system, Musk stressed that utilities have nothing to fear from the announcement. “As electric vehicles add demand for the power system, Musk predicted that utility power will need to increase, eventually reaching an equilibrium with about one-third of power coming from distributed energy and two-thirds from utilities.”

TechCrunch’s report on Tesla’s “stunning new solar roof tiles” stresses the curb appeal of the new product. “The solar roofing comes in four distinct styles that Tesla presented at the event, including ‘Textured Glass Tile,’ ‘Slate Glass Tile,’ ‘Tuscan Glass Tile,’ and ‘Smooth Glass Tile,’” the news outlet notes. “Each of these achieves a different aesthetic look, but all resembled fairly closely a current roofing material style. Each is also transparent to solar, but appears opaque when viewed from an angle.”

The report notes that Tesla’s current roof tiles are 2% less efficient than standard solar panels. “But the company is working with 3M on improved coatings that have the potential to go above normal efficiency,” TechCrunch notes. Moreover, “standard roofing materials do not provide fiscal benefit back to the homeowner post-installation, besides improving the cost of the home. Tesla’s product does that, by generating enough energy to fully power a household.”

The day before the Los Angeles launch, Tesla announced that it had begun shipping the grid-scale version of its Powerwall battery in October. Batteries for two major utility-scale projects are being built at the company’s new gigafactory near Reno, Nevada.

“The company said the new battery has twice the energy density of its predecessor, but performance details such as cycle life and degradation rates were not made available,” Utility Dive reports.