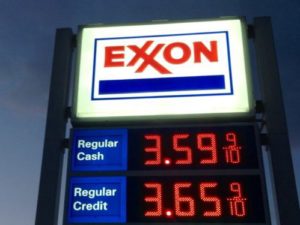 Once-dominant ExxonMobil Corporation has gone into long-term decline, as the world begins “moving in fits and starts but with gathering momentum toward a more diversified, low-carbon energy mix,” the Institute for Energy Economics and Financial Affairs warns institutional investors, in the summary of a blockbuster analysis it released this week.

The report notes three red flags in the company’s recent financial performance: annual revenue down 45% in the last five years, long-term debt quadrupling to almost US$30 billion, and management decisions to borrow money in order to pay shareholder dividends and buy back shares.

“ExxonMobil of course is still a gargantuan force, but it is not what it was in years past, when seven of the top 10 stocks in the S&P 500 ranked by market capitalization were oil companies,” writes IEEFA Director of Finance Tom Sanzillo.

“It is a less important company now than the likes of Google or Apple. Payouts to investors are not sustainable because, for the better part of a decade now, ExxonMobil’s shareholder distributions—that is, its stock buybacks and dividends—have exceeded the company’s operating revenues.”

For years, Exxon’s stock and the Standard & Poor’s 500 stock index rose and fell in tandem, Sanzillo writes, “gaining in the long haul as the oil company and the stock market reaped robust returns for investors.” But that all changed in 2014, as the S&P continued to climb while the value of Exxon stock began to tank.

“It’s a trend we think is likely to continue,” he notes. “Exxon’s performance is driven by oil prices, which are low and are expected to remain low. And it is, frankly, on the wrong side of history as the global energy economy evolves into a less fossil fuel-reliant animal.”

The bottom line: Exxon’s returns to shareholders last year fell to $16 billion from a 10-year average above $30 billion, and “this year the number will probably be smaller.”

The likely future for Exxon is visible in the company’s own declining investment in future projects, and projections of future low oil prices from the likes of the World Bank, the International Monetary Fund, the U.S. Energy Information Administration. Adding to Exxon’s woes, the company “is involved now in an escalating controversy over how transparent it has been its evaluation of climate change risk,” Sanzillo writes. “At the very least, investors can expect a long-term, highly publicized legal entanglement in several venues.”