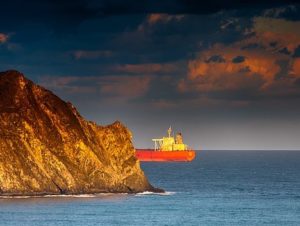 Canada’s Transportation Safety Board opened an investigation into the grounding on the British Columbia coast of a U.S.-owned tugboat, as diesel continued to leak from the sunken vessel’s fuel tank and containment booms were foiled by seasonal storms.

An organization representing shippers, meanwhile, responded by urging Ottawa not to follow through on an election pledge to ban much larger shipments of crude oil in the region.

The Nathan E. Stewart hit a shoal in Seaforth Channel early on October 13 while pushing an empty barge south from Alaska. The barge, which can carry up to 52,000 barrels (2.2 million gallons) of oil, was empty, but diesel fuel oil escaped from the punctures in the tug’s fuel tanks.

Efforts to contain the leak have been only partly successful. Although crews deployed containment booms and skimmers, and pumped remaining diesel from the tug’s tanks, the clean-up has been hampered by storms typical for the season, and “aerial surveillance continues to find oil escaping beyond the booming equipment,” the National Observer reports.

The spill has outraged the local Heiltsuk First Nation, which had for months been calling attention to the threat posed by a federal decision to allow the American tug to travel close to the region’s reef- and shoal-dotted shoreline without a Canadian pilot aboard (that concession was revoked in the wake of the spill).

“More than half of the Heiltsuk’s harvesting clam beds have already been lost to pollution” from the expanding diesel slick, the Observer notes, “and the First Nation is worried they could lose sea cucumbers, salmon, herring, kelp, urchins, and other valuable marine species that live in the region.”

“From the air, it looks like the spill is completely free in the water,” said Heiltsuk Chief Marilyn Slett. “Why weren’t seaworthy booms put in place immediately after the spill?”

The inadequate response to the foreseeable accident has brought criticism down on the government of B.C. Premier Christy Clark, who in turn has blamed the federal government, which bears constitutional responsibility for protecting Canada’s oceans and marine environment.

New Democrat MP Nathan Cullen, whose Skeena-Bulkley Valley riding includes the site of the grounding, echoed that charge in a statement to The Tyee, calling the event “another warning of what could happen when Ottawa is not paying attention to coastal safety.”

“We are all victims of government oil spill response rhetoric, but the brunt of the consequences fall on local communities and wildlife,” said Misty MacDuffee, wild salmon program coordinator for the Raincoast Conservation Foundation. “Right now, B.C. seems to be planning for world-class oil spills by facilitating the introduction of greater threats,” she added, “when they need to bring existing vessel safety and spill response capacity up to much higher standard.”

The sinking and resulting ecological damage have renewed calls for the Trudeau government to act promptly on a commitment made during last year’s election campaign, and reiterated in the Prime Minister’s mandate letter to Transport Minister Marc Garneau, to impose a moratorium on oil tanker traffic on the British Columbia coast.

But the International Chamber of Shipping, which claims to represent the owners of “over 80% of the world merchant fleet,” responded to the spill by warning Trudeau against a moratorium.

“We believe that a moratorium applicable to Canadian waters would be [a] draconian step that could lead to serious concerns being raised by Canada’s international trading partners,” the industry lobby group wrote in an open letter reprinted in MarineLog. “Such a measure would set an unwelcome precedent that might be emulated elsewhere, including by individual U.S. states, with the potential to impact greatly on the efficiency of world trade as well as that of Canada.”