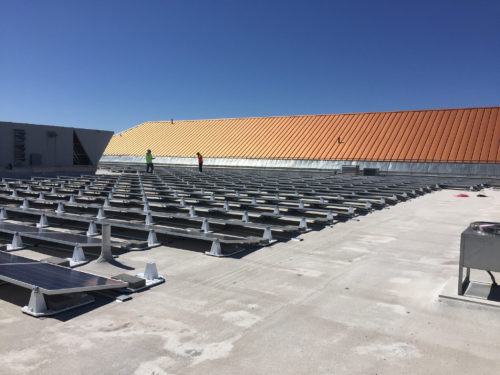 Solar production in the United States will nearly triple between 2014 and 2017, as natural gas takes its place as the country’s dominant electricity source and coal continues to fade, Climate Central reported last week, based on data from the U.S. Department of Energy.

“Renewables still make up only a fraction of the U.S. power supply—8% this year,” Climate Central notes. “That’s expected to grow to 9% next year, and the biggest driver of that growth is solar,” an electricity source that “has been on a tear in recent years” thanks to lower equipment costs and renewal of a federal tax credit.

“Congress extended the solar tax credit early this year,” notes correspondent Bobby Magill, “helping to fuel a 39% annual growth rate for solar power-producing capacity, to 27 gigawatts by next year from about 10 gigawatts in 2014, or enough to power about 3.5 million homes.” U.S. wind energy production is expected to grow about 8% this year, following a 15.5% increase in 2015.

“Because of pent-up demand due to uncertainty over the federal tax credit, solar had a record year in 2016,” said Doug Vine, senior energy fellow at the Arlington, VA-based Center for Climate and Energy Solutions. “Solar capacity buildout is expected to be similar next year.”

Coal-fired generation, meanwhile, is on the decline, after nearly a century as king of U.S. power generation. “New mercury pollution regulations for coal-fired power plants have taken effect, renewable energy has become cheaper to produce, and electric power companies have begun to gear up for the Clean Power Plan,” Magill writes. As a result, “for the first time in history, more electricity is produced using natural gas than with coal.”