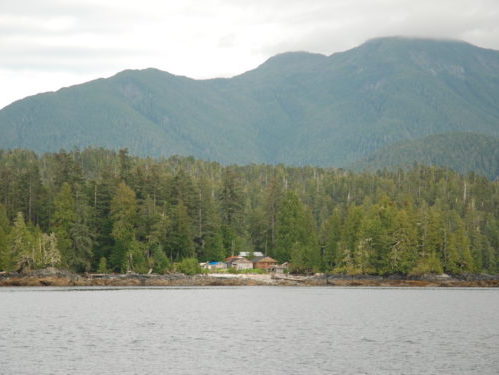 A comparatively small spill of diesel fuel that threatens severe damage to Indigenous seafood harvests near the site of several proposed oil and gas export terminals is raising the pressure on the Liberal government to clarify its position on tanker traffic along the west coast of Canada.

The Heiltsuk First Nation said it was considering legal action against the U.S. owners of a tug and oil barge that ran aground on Athlone Island west of the Heiltsuk community of Bella Bella, on British Columbia’s central coast, early October 13. The Nathan E. Stewart was pushing a barge that can carry as many as 52,000 barrels (2.2 million gallons) of oil; the barge was empty, fortunately, but a portion of the tug’s fuel load of 60,000 gallons of diesel leaked into the sea.

Athlone is one of an archipelago of islands and sheltered, shallow waters whose sea resources have been the basis of the traditional and modern Heiltsuk economies. An oil slick continued to spread over the area, even after the leak in the tug appeared to have been largely contained. Days after the tug hit the rocks, the National Observer reported that efforts to contain the spilled diesel were “failing.”

“It’s really bad out here,” Heiltsuk Integrated Resource Management Director Kelly Brown told the Observer. “A lot of fuel is on the beach already, and fuel is in the water. The initial spill response has been totally inadequate.”

“Our main sites for the clam harvest have been affected and essentially shut down by [the federal Department of Fisheries and Oceans],” Chief Marilyn Slett said in a release. “It’s going to have an immediate impact.”

More worrisome could be the longer-term effects. “This spill area is in one of our primary breadbaskets, and we know that diesel is extremely difficult to recover,” Slett observed. “Our Gitga’at neighbours to the north are still unable to harvest clams and other seafoods, ten years after the sinking of the Queen of the North.”

Vancouver news radio station CKNW reported that “while the Nation is still surveying the extent of the damage, conversations have already begun about making a case against the vessel’s owners, Texas-based Kirby Offshore.”

The company defended its spill response. “Resources to meet a worst possible discharge have been activated and are either on scene or on route,” Jim Guidry, Kirby’s incident commander, told the Observer. “Kirby Offshore Marine, owners and managers of the Nathan E. Stewart, regret that this incident has occurred and are working to respond and mitigate the impact of this incident.”

However, “the environmental damage has already been used to boost arguments against proposed oil and gas pipeline projects that could increase tanker traffic along the pristine waters and inlets surrounding B.C.’s Great Bear Rainforest, a home to a rich and complex ecosystem made up of bears, whales, salmon, wolves, and other species,” writes the Observer’s Elizabeth McSheffrey.

The Liberal government campaigned on a promise to issue a moratorium on oil tanker traffic from Canada’s west coast, and Prime Minister Justin Trudeau included instructions to formalize such a measure in his mandate letter to Transport Minister Marc Garneau nearly a year ago. But “so far, federal representatives have refused to provide any details on the upcoming legislation,” McSheffrey notes.

Whether such a moratorium would have prevented last week’s spill is questionable, however. The Nathan E. Stewart is an American vessel that shuttles between Alaska and the lower 48 states. As the Globe and Mail’s Gary Mason noted last November, the United States maintains it has freedom to navigate along the B.C. coast, and “any measure that hinders American oil supplies from reaching communities in the Alaska panhandle is not going to make our U.S. neighbours happy.”