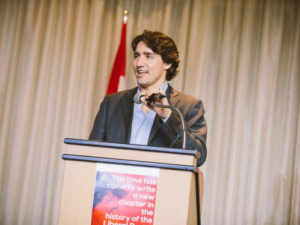 Allowing the proposed terminal to be built, McKibben argues in a biting critique in the National Observer, proves that Canada “was clearly (and literally) blowing smoke in Paris last year.”

Acknowledging the prime minister’s photogenic popularity (“He has a tattoo! He takes his shirt off, like, constantly!”), McKibben argues the decision to green-light the proposed terminal “flies in the face of Canada’s Paris commitments because, at base, it defies the unassailable arithmetic of climate change.”

That math was strongly reinforced last month when Oil Change International calculated that “the carbon in the oil and gas fields and coal mines already in production will take us past the two degrees of global warming that all nations pledged to avoid in Paris last year.

“That is to say,” McKibben adds, “we’ve already built as much fossil fuel infrastructure as we can possibly tolerate. Or, to put it more bluntly, the one thing we can’t do is keep expanding. We can’t go explore for new oil and gas fields. We can’t even develop the ones we already know about.”

This prescription would mean no expansion of existing tar sands/oil sands operations. But, McKibben notes, “that kind of expansion is precisely the reason Trudeau’s Liberals and Alberta’s NDP, not to mention Conservatives, want to build new pipelines.”

“This isn’t ideology,” the American author and activist writes of the need for a hard brake on all new fossil infrastructure. “This is just math. It’s not even hard math.”

In the Toronto Star, meanwhile, columnist Thomas Walkom argues that Trudeau’s landmark climate policy announcement this week sets a carbon price that is too low to be effective.

“The theory behind all of this is that if the costs associated with greenhouse gas emissions are made explicit—and are high enough—then individuals and businesses will pollute less,” he writes. “And there’s the problem: The carbon-price minimums Trudeau announced are just too low to work on their own.”

Walkom cites York University’s Mark Winfield as one of a number of analysts who think it would take a price or $30 per tonne today, rising to $200 by 2030, to meet Canada’s current carbon reduction commitments.