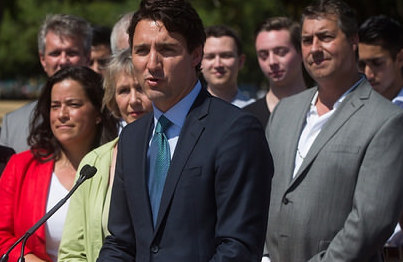 Prime Minister Justin Trudeau laid out the ground rules for Canada’s long-awaited national carbon price Monday afternoon, declaring that Ottawa will impose a minimum price of $10 per tonne in 2018, rising to $50 per tonne by 2022, if provinces or territories don’t set their own pricing policies in the next two years.

“A tough-talking Trudeau told MPs in the House of Commons that provinces can craft a cap-and-trade system or put a direct price on carbon pollution—but it must meet the federal benchmark or ‘floor price,’” CBC reports. “If neither price nor cap-and-trade is in place by 2018, the government of Canada will implement a price in that jurisdiction,” the PM stated.

Jurisdictions that do develop their own pricing schemes will have free rein to choose between carbon taxes or cap-and-trade and design their own systems as they see fit, as long as they adhere to Ottawa’s minimum price per tonne. Any pricing systems the federal government imposes on individual provinces or territories will be revenue-neutral, Trudeau said, with all proceeds going back to the jurisdictions where they are collected.

“We are standing at the threshold of an incredible opportunity to build a strong and clean economy, one that will protect our environment and create opportunities for middle class families today and in the generations to come,” Environment and Climate Change Minister Catherine McKenna said in a release. “Pricing pollution is one of the most efficient ways to reduce greenhouse gas emissions and to stimulate innovation. Already, 80% of Canadians live in a province where there is pollution pricing. We want to continue this trend and cover the final 20%.”

Reaction in Montreal, where McKenna was meeting her provincial and territorial counterparts, was immediate. And some of it was fierce. Saskatchewan, Nova Scotia, and Newfoundland and Labrador walked out of the meeting in response to Trudeau’s statement. In Edmonton, meanwhile, Alberta Premier Rachel Notley said her government would only go along with the national plan if it saw the federal Cabinet approve at least one new tar sands/oil sands pipeline. “An ambitious public policy move like this, even one as worthwhile as this, needs to be built on top of a fundamentally healthy economic foundation,” she said.

One critic, who declined to be identified, described the three-province walkout in Montreal as “a frankly appalling display of immaturity. What more could they ask of in terms of an accommodating carbon pricing plan? The starting price is (too) low, they have plenty of time to design a system, and they have complete flexibility in that design.”

The Canadian Council of Ministers of the Environment issued a more sanitized account of the meeting, citing the group’s 2016 chair, Quebec Environment Minister David Heurtel. “Our discussions today demonstrate our commitment to working together and joining forces to ensure a flexible, joint, and complementary approach to fighting climate change based on the leadership, actions, and specific circumstances of each jurisdiction,” he said. “This will allow us to make further progress on emissions reduction, resilience, and transition to a low-carbon economy, consistent with the commitments made in Paris.”

Catherine Abreu, executive director of Climate Action Network Canada, acknowledged that Trudeau “showed conviction when it comes to putting a price on carbon,” a move she described as “a critical element of a climate plan that sets Canada up do our fair share in the global effort to cut climate pollution.”

But carbon prices and climate plans “are only as good as the emissions reductions they result in,” she noted. “By making carbon pricing revenue neutral for the federal government, this plan puts the onus on provinces and territories to make good use of the money generated from a carbon price by investing in the clean energy infrastructure of the future and helping to improve the lives of vulnerable Canadians.”

Matt Horne, the Pembina Institute’s associated director for British Columbia, commented that “an incentive to cut carbon pollution that will grow over time is a big positive for the country from coast to coast to coast.” He added that “allowing provinces to design their own carbon pricing systems and manage the revenue gives them the flexibility they need to pursue opportunities and tackle challenges as they see fit.”

But Dale Marshall, national program manager at Environmental Defence, cautioned that Ottawa “needs to do much more than carbon pricing to reduce emissions and fulfill Canada’s Paris commitment to limit warming to 1.5°C.” Those additional steps must include a rapid phaseout of coal-fired generation and deep cuts to methane emissions.

“Polluters, not Canadians, must pay the costs of carbon emissions,” Marshall said. ‘Those costs will be paid one way or another, either through a price on carbon or through health impacts from air pollution and the impacts of more severe floods, droughts, and forest fires.”

And Alex Doukas of Oil Change International pointed to the “multi-billion-dollar elephant in the room,” citing the C$3.3 billion in subsidies the country still advances to fossil companies each year. “Canada’s fossil fuel subsidies threaten to cancel out proposed national carbon price,” read the headline of Oil Change’s news release.

“We tax cigarettes because they’re harmful to society, and Canada plans to price carbon for the same reason. But putting a price on carbon while ignoring the fact that we still subsidize fossil fuel production doesn’t make any sense,” Doukas said.

“That’s like taxing cigarettes while at the same giving handouts to tobacco companies to make more of them.”