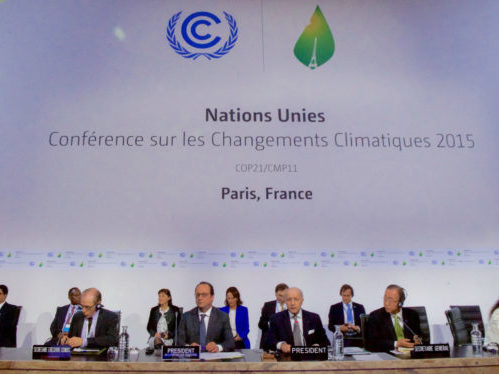 CORRECTION, 12:02 PM EDT October 5: As the Reuters story shows, there’s a lot of confusion about the status of Paris ratification. At this moment, the EU has voted on fast-track ratification, but has not yet officially deposited its instruments of ratification with the United Nations. So the current tally, with India and New Zealand ratifying, is 63 countries representing 52.11% of global emissions.

(The World Resources Institute is tracking the ratification process here.)

To hit the 55% threshold that will bring the Paris Agreement into force, any two of Canada, Germany, France, Korea, or Indonesia will have to ratify…or the EU will have to ratify as a group, a move that is expected by the end of this week.

The world’s second-largest economy and its second-largest national population have decisively pushed the Paris Climate Accord over its ratification threshold of at least 55 countries representing at least 55% of global emissions. That means the deal will enter into force next month—less than a year after diplomats hammered it out, and four years before they expected it to take effect.

The country-number threshold was exceeded last month. And yesterday, Europe’s Parliament voted 610 to 38 to adopt what Reuters called “a fast-track, joint ratification of the Paris accord” that is expected to achieve the emission-share threshold necessary to bring the global climate pact “into force in early November, before the next global climate conference in Morocco.”

A European Council agreement brokered the previous week among all 28 EU member states overcame issues of regional pride, trade, and right-wing backlash, particularly against limits on coal use. In doing so, it marked “a rare political breakthrough” for the world’s second-biggest economic market, Reuters noted, battered as it is by a migrant crisis and Britain’s planned secession,

Meanwhile, India, “which accounts for about 4.5% of global greenhouse gas emissions, ratified the Paris climate change agreement on Sunday [Oct. 2] at the United Nations,” Associated Press reported, bringing to 62 the number of countries that have ratified the accord. Canada’s Parliament is scheduled to debate ratification this week.

While the international climate community cheered the prospect that the Paris deal would come into force before its first birthday, the pace of political endorsements has overtaken diplomatic planning to the point that some observers now see 2018 as the earliest its implementation can be expected to begin.