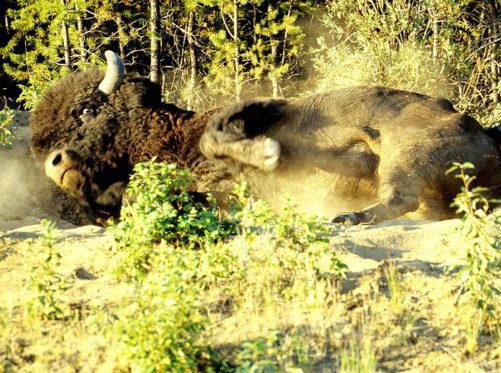 Half a century after British Columbia’s construction of the W.A.C. Bennett Dam caused widespread wildlife mortality in what is now the Wood Buffalo National Park protected area, at the confluence of the Peace and Athabasca rivers, UNESCO is examining the world’s largest freshwater delta to see if it should be declared under threat from the province’s latest hydro plans.

UNESCO designated the vast inland delta at the eastern edge of Lake Athabasca in northern Alberta a World Heritage Site in 1983. In 2014, the indigenous Mikisew Cree First Nation, “petitioned the world body to list the park as being under threat from various developments,” CBC reports. This week, UNESCO sent a team to investigate “the effects that damming has had on the area, the potential effects of the planned Site C Hydroelectric Dam, and the impact of oilsands projects in the Athabasca region,” the national broadcaster notes.

By making Wood Buffalo the first World Heritage Site in Canada to join its list of 55 such global locations under threat, UNESCO would draw attention to the activities threatening the delta and unlock access to preservation assistance from the World Heritage Fund.

The water withheld from the Peace River in order to fill the vast reservoir behind the Bennett Dam, in its day one of the world’s largest, continues to haunt the Mikisew Cree. The project “changed the delta,” Mikisew Cree member Melody Lepine told CBC, “and the change has never been reversed.” She called it still one of the biggest issues the community is facing.

Now, Lepine said, “we’re asking for a buffer zone placed around [the site] so we don’t have activities going right to the border of Wood Buffalo National Park, so that there is no mining direct to watershed.”

The UNESCO review team was also scheduled to tour a tar sands/oil sands mine. It will present a report and recommendations to the federal government.