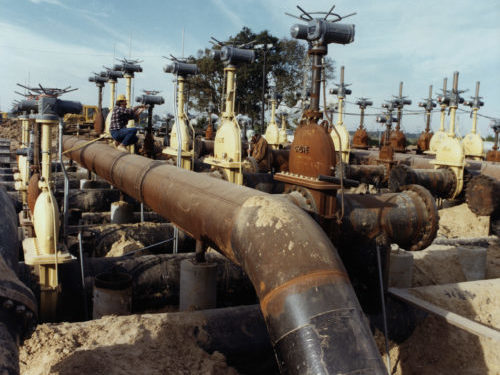 Pressure from Canadian oil producers for more pipelines to access offshore markets is certain to increase with reports that existing outlets to the United States are running close to or even above capacity, forcing companies to turn to more dangerous shipments by rail.

“Canada is sending a record amount of oil to the U.S., filling pipelines to capacity and threatening to push more crude into rail cars,” Bloomberg reports. Shipments reached a record 3.46 million barrels a day earlier this month, the most since the U.S. Energy Information Administration began keeping records in 2010.

“Enbridge Inc.’s mainline system, the most important conduit for shipping Canadian crude into the U.S., has been running above its 2.4 million-barrel-a-day capacity and was full in August,” Bloomberg wrote. “Other lines including TransCanada’s Keystone were about 89% full last month.

Part of the surge can be explained by tar sands/oil sands capacity returning to production after the summer’s devastating Fort McMurray wildfire. But western Canadian syncrude production is expected to grow another 5% next year, to more than four million barrels a day, with the completion of projects being developed by Cenovus Energy Inc. and Canadian Natural Resources Ltd.

“As volumes continue to build, so will pressure on the constrained pipelines system,” argued Kevin Birn, a director at IHS Energy in Calgary. “At some point in the coming months, those volumes could very well overtake available capacity and increased movements of rail should be expected.”

While rail transport can move oil to market, it is more expensive than pipelines, forcing Canadian producers to accept a greater discount on the price they can charge for their crude, Bloomberg notes.

Rail has also been associated with greater oil transportation safety risks, notably the catastrophic explosion of an oil train at Lac Mégantic, Quebec, in 2013, killing 47 people, orphaning 27 children, and levelling more than 30 buildings.