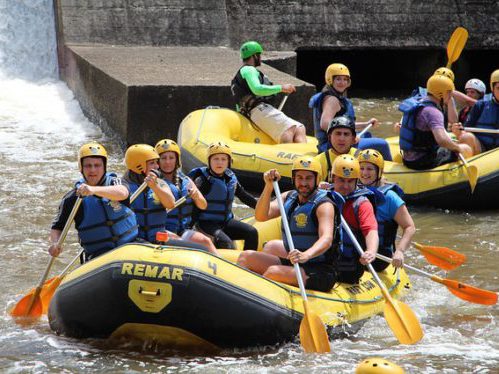 Although British Columbia’s embrace of liquefied natural gas (LNG) is supposed to deliver jobs that are in short supply in the economically depressed northwest interior, the province’s youth aren’t necessarily sold on the idea of building careers in energy megaprojects.

A total of 80 potential projects would bring up to C$234.4 billion to the province’s North Coast and Nechako regions, The Tyee reports. “Proponents say those dollars would create much-needed jobs,” writes correspondent Katie Hyslop. “Detractors say that if, or when, something goes wrong, the environmental destruction could be monumental and last decades.”

And on a recent two-week visit to the northwest, including a rafting trip down the Bulkley River, Hyslop found members of the industry’s potential work force who are ambivalent at best about the jobs on offer.

“When it comes to the LNG stuff, a lot of people are all about the money,” said 14-year-old Autumn McRae. “And after, is it really that worth it? It will bring jobs, but after everything’s all over and done with, if something goes wrong, then our fish and everything’s just wiped out because there’ll be oil in the river.”

“There’s not that many jobs around here,” said 15-year-old Kobe Muldoe, a member of the Gitxsan nation. “But he doesn’t believe LNG is safe — despite industry’s explanation that liquefied natural gas will evaporate in the event of a leak,” Hyslop reports.

“There’s so much bad things that can come out of it, more bad things than positive,” said 18-year-old Wet’suwet’en musician Simbiyez Wilson, who said her high school had pressured students into trades that depend on resource extraction.

“Every other week we had [an assembly] about trades and how [Northwest Community College] is now only offering pretty much trades instead of philosophy, archaeology, and stuff like that,” she told Hyslop. “I was really irritated. I could tell it had something to do with getting everyone more focused on the megaprojects.”