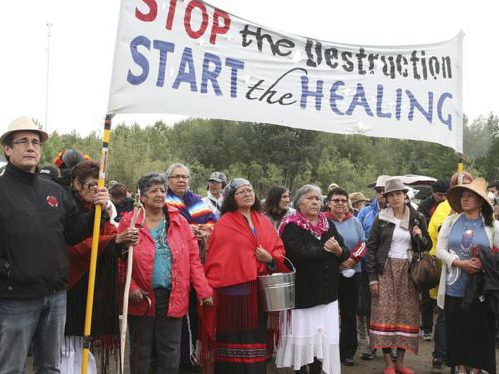 Fifty Aboriginal groups from Canada and the United States have signed the Treaty Alliance Against Tar Sands Expansion, promising to support each other’s fight against further development of tar sands/oil sands projects in their territories.

“Based on our sovereign, inherent right to self-determination, we have collectively decided that we will pick up our sacred responsibilities to the land, waters, and people. We will come together in unity and solidarity to protect our territory from the predations of big oil interests, industry, and everything that represents,” said Grand Chief Stewart Phillip of the Union of British Columbia Indian Chiefs.

“In this time of great challenge, we know that other First Nations will sign on.”

“We have the right and the responsibility to stop these major threats to our lands, our waters, and our peoples,” said Kanesatake Grand Chief Serge Simon. “From Quebec, we will work with our First Nation allies in B.C. to make sure that the Kinder Morgan pipeline does not pass, and we know they’ll help us do the same against Energy East.”

Grand Chief Derek Nepinak of the Assembly of Manitoba Chiefs said the communities’ goal is to “safeguard a future for all peoples, Indigenous and non-Indigenous as well,” writes the Observer’s Elizabeth McSheffrey. “We want to work with the Prime Minister and the government to develop a sustainable economy that does not marginalize our people,” he told the signing ceremony.

U.S. signatories to the treaty include the Standing Rock Sioux, the Lummi Nation in Washington State and the White Earth Nation in Minnesota, which is fighting Enbridge’s Line 3 “replacement” project in court.