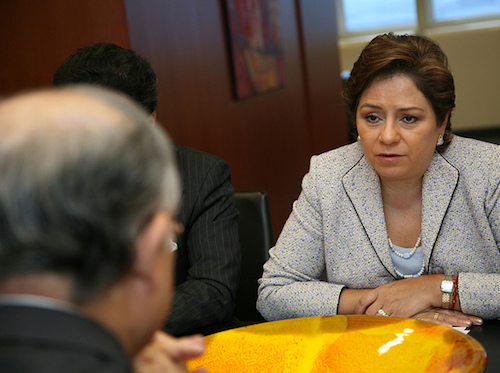 The Paris Agreement has cleared the 55-nation threshold for ratification, according to early reports this morning from a high-level climate gathering in New York hosted by United Nations Secretary-General Ban Ki-Moon.

“This momentum is remarkable,” Ban said. “It can sometimes take years or even decades for a treaty to enter into force. It is just nine months since the Paris climate conference. This is testament to the urgency of the crisis we all face.”

Yet “concerns abound” about the “complex situation” that would result if reality TV star Donald Trump won the United States presidency and tried to pull the country out of the global accord, ClimateWire reports, based on an interview with incoming United Nations Climate Secretary Patricia Espinosa.

“I think everybody’s aware of that possibility and just concerned about it,” Espinosa said, but the impact of a Trump attempt to “cancel” the deal would depend on how other countries responded.

Speaking a few days before today’s meeting, Espinosa said it was “possible” the session would produce enough new ratifications to bring the Paris Agreement into force, less than a year after nearly 200 nations adopted it. “Approximately 30 countries are expected to deposit their instruments of ratification during a one-hour gathering at UN headquarters,” ClimateWire noted at the time, but “it seems likely that the emissions requirement will take a few more weeks to fulfill.”

Climate Home reports that outcome may be “near enough to embarrass the EU into proposing a fast-track plan that would bypass leisurely member state processes” for ratifying Paris.

“European Commission president Jean-Claude Juncker warned in his state of the union address that foot-dragging made the bloc ‘look ridiculous’ and lose credibility,” writes correspondent Megan Darby. “If he can convince national leaders at a Bratislava summit on Friday, Brussels could ratify within a month, pushing the pact into action.”

Espinosa also discussed the possibility that this year’s UN climate summit in Marrakech could become the first Conference of the Parties to the Paris accord—meaning that official discussions would only be open to countries that had ratified by the time the meeting convened. “Of course we want a universal agreement, and we want a universal application,” she said. “So it would be important that we have a very inclusive process.”

So the Marrakech session could be largely “procedural”, as earlier signatories wait for other countries to join the deal and have their say on its implementation.

As attention shifts from negotiating Paris to delivering on nations’ commitments, Espinosa’s agenda “goes beyond writing ground rules for the agreement,” writes ClimateWire’s Jean Chemnick. “Another focus will be helping developing countries gain the capacity to deliver on their pledges toward Paris, she said, including with financial assistance from developed countries. It’s also important to better integrate the actions being taken by non-state actors like cities, subnational governments, and the private sector—known collectively as the Global Climate Action Agenda—into the more formal, nationally-determined contributions of Paris.”