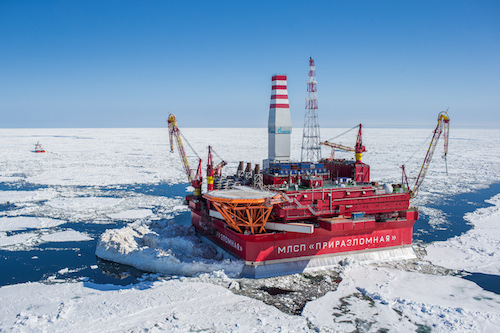 The fossil industry is ramping up pressure in favour of Arctic oil and gas drilling, ahead of a decision the U.S. Department of the Interior expects to make before the end of the year.

The pro-drilling Arctic Energy Center has placed TV ads in Washington, DC, stressing the economic importance of oil and gas to the Alaska economy.

“The oil industry argues that to cut off drilling entirely in the U.S. Arctic would put the country not only at an economic disadvantage but hurt national security,” FuelFix reports. “A letter signed by 15 retired military commanders, along with William Cohen, secretary of defence under President Bill Clinton—which the Arctic Energy Center says it will run in print publications and online—argues that Russia has already amassed a superior position in the Arctic while the U.S. position is weakening.”

The letter states that “the strategic significance of the Arctic is growing due to rapid change in the physical and geopolitical environments. Excluding the Arctic from the [drilling plan] would harm our ability to protect our interests and to promote cooperation in the region.” (h/t to InsideClimate News for pointing us to this story)